The surrealist circus comes to town : Director was inspired by 1944 backdrop painting done by Salvador Dali

The surrealist circus comes to town : Director was inspired by 1944 backdrop painting done by Salvador Dali 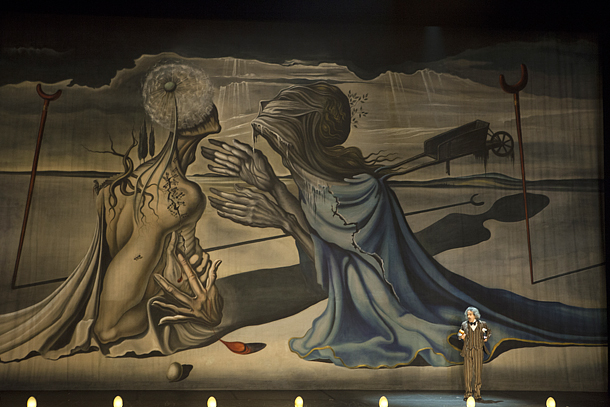 European circus “La Verita” by director Daniele Finzi Pasca uses surrealistic painter Salvador Dali’s “Mad Tristan” as its impetus. The backdrop painting was painted in 1944 upon request by the New York Metropolitan Opera’s ballet performance. It went missing after the performance, but was dramatically found in 2009. [VIVIANA CANGIALOSI]

A circus camped in Seoul on Thursday to hold a four-day show at the LG Arts Center in southern Seoul. The show has the expected jaw-dropping juggling and spine-chilling aerial stunts, but that’s not all there is to “La Verita,” the so-called “art circus.”

This European circus is written and directed by renowned show director Daniele Finzi Pasca, and performed by his company Compagnia Finzi Pasca, composed of members from 18 different countries. Inspired by the art of Salvador Dali (1904-1989), the prominent Spanish surrealist painter, Pasca attempts to show that the circus can be artistic, and not only for its acrobatics.

“It’s a circus with difference,” said Pasca during a press conference held in Seoul on Tuesday.

“We had a lot of conversation within the company to not just present the audience with a jaw-dropping show but also to move the audience and to touch their hearts in a way that’s never experienced in ordinary circus shows,” he said.

According to Pasca, he decided to create “La Verita” after he was given an unused backdrop featuring symbolic figures of Tristan and Isolde, which was painted by Dali in 1944 for famous choreographer Leonide Massine’s New York Metropolitan Opera’s ballet work titled “Mad Tristan.”

The backdrop painting that is 9 meters (30 feet) tall and 15 meters wide, had been lost many years after it was used in a ballet performance in 1944, but was found in 2009 inside a storage facility of the New York Metropolitan Opera.

It was auctioned off in 2009 to an anonymous collector, who thought it would be better for it to serve its original purpose rather than being hung inside a museum. The collector then handed the backdrop over to Pasca to use for his show. Using a replica of the backdrop - Pasca says the original is being repaired - sets the tone of this circus being a surrealist piece of art.

“Surrealistic paintings have the power to give people illusions of various emotions like love and fear. When looking at Dali’s painting in the perspective of Freud’s psychoanalysis, I believe he expressed his inner self, fusing it with his nightmares,” said Pasca. “To take this issue slightly lighter for the show, I adopted the perspective of Chagall, the way he viewed Dali’s art world.”

Pasca said that he was deeply inspired and decided to create a show that pursues the surrealistic world of Dali, fusing it with his field of expertise - a circus. Pasca wrote and directed the Cirque de Soleil show “Corteo” in 2005 and also directed the closing ceremonies of both the Torino and Sochi Winter Olympic Games.

To create the show, Pasca said he visited the Salvador Dali House museum in Cadaques, Spain to really understand the artist and see with his own eyes what had influenced him.

“The ‘Mad Tristan’ was painted not long before his death,” said Pasca. “I wanted to witness and understand what kind of books he had read during that time and what life was like for him as well.”

“For me, the circus is something very delicate and detailed,” Pasca added. “I believe the acrobatic circus is not simply an amazing show. It’s art form that expresses itself through acrobatics the moments of one’s life, the sparkling moments, the moments of sadness, joy and so on.”