To pull out of slump, Ahn promises a coalition government

To pull out of slump, Ahn promises a coalition government 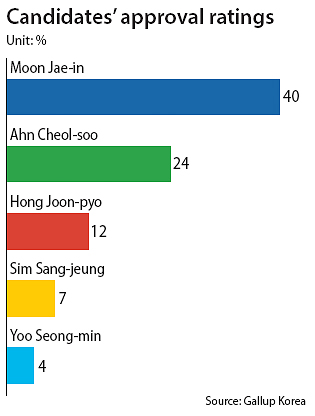 Scrambling to save a campaign that’s losing its wheels, People’s Party nominee Ahn Cheol-soo Friday unveiled a plan to form a coalition government of reform-minded forces from across the ideological spectrum - but excluding those who opposed the impeachment of former President Park Geun-hye.

Ahn’s novel plan is an attempt to revitalize a campaign that has lost momentum after reaching a peak just two weeks ago.

In an obvious effort to woo back conservative voters who are flocking to Liberty Korea Party (LKP) nominee Hong Joon-pyo, as seen in recent polls, Ahn promised a coalition government that includes all forces that agree with the need for reform.

“I will walk [on the path of governing] with all political forces that consent to the need for reform and a coalition governing for the people,” said the software mogul-turned-politician at his party headquarters in Yeouido, western Seoul.

To decant some of the power heavily concentrated in the president, Ahn pledged to appoint a prime minister recommended by the National Assembly and grant him or her authority to recommend cabinet members. That is written in the Korean Constitution but has rarely been practiced.

Ahn laid out additional steps to decentralize presidential authority, which critics maintain is too powerful and lacks checks and balances.

“I will take on a mission to reduce the power of the president and the Blue House, which should not be the center of power anymore,” said the candidate. “I will give up the unchecked power that the Blue House has exploited at the expense of the administration.”

He said he would put a constitutional amendment to change the power of the president as well as the electoral system to a national vote in local elections slated for June 2018.

But it remains to be seen how much of a boost Ahn will get from his coalition government promise and recruitment of the former DP chief with the snap May 9 election only 10 days away.

While former DP leader Kim does command support from moderate voters, he dropped his own bid for president earlier this month as his approval rating in the polls was less than 1 percent.

Ahn’s popularity shows no sign of bouncing back to where they were just two weeks ago, when he was neck-and-neck with Moon. The gap in their poll numbers was within the margin of error.

But Ahn’s lackluster performances in debates made voters look around for another candidate.

In the latest poll conducted by Gallup Korea of 1,006 adults nationwide, Moon leads Ahn by 16 points.

Ahn’s drop is attributable to a change of heart among conservative voters and those who reside in Daegu and North Gyeongsang, the traditional support base for the LKP. Of the Gallup poll respondents who identified themselves as conservatives, Ahn’s popularity dropped to 29 percent from 48 percent two weeks earlier. Meanwhile, Hong’s approval by conservatives surpassed Ahn’s to reach 36 percent, up from 20 percent a week earlier.

Ahn’s recent flip-flop to approve of the U.S.-led anti missile Thaad system is meant to shore up conservative support, though it has produced little effect so far.

Absorbing Ahn’s supporters, Hong’s approval tripled over the past month, reaching 12 percent of support from 4 percent a month ago.

30 percent of the respondents said Sim, the only female candidate, did better than the other candidates in the debates.

The poll was conducted from Tuesday through Thursday with a margin of error of plus or minus 3.1 percentage points.