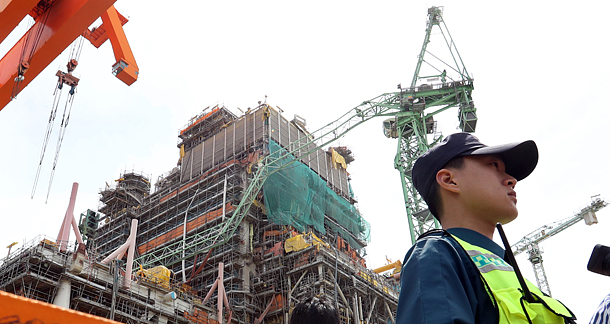 A 32-ton tower crane is warped like a piece of taffy after having collided with an 800-ton goliath crane at the Samsung Heavy Industry shipyard in Geoje, South Gyeongsang. Six workers died and 25 suffered injuries. [YONHAP]

Six workers died and an additional 25 were injured after a crane collision at the Samsung Heavy Industries shipyard at the port of Geoje, South Gyeongsang on Monday.

A 32-ton, 60-meter (197-feet) tower crane fell onto a rest area for workers on the top of a 20-meter offshore platform being constructed at the yard after colliding with an 800-ton goliath crane at 2:50 p.m. Monday.

According to Kim Jun-soo, head of investigations at the Geoje Police Department, the exact cause of the collision couldn’t be confirmed due to conflicting accounts by eyewitnesses. Initial conclusions point to a violation of safety regulations.

“We are seeing this as an accident that arose due to signals not done properly between the crane operators and signalers,” said Kim Hyo-seop, head of the Geoje shipyard of Samsung Heavy Industries, on Tuesday.

Tower cranes are fixed balance cranes, found at constructions sites everywhere, while the goliath crane is a special type of shipbuilding crane, a gantry crane, which typically loads containers on and off container ships or lifts ship subsections.

The operators and the signalers of a moving goliath crane must be in communication at all times with the tower crane team to avoid any possible obstructions.

Six workers died immediately when the tower crane landed on the rest area and 25 workers suffered injuries and were transported to four hospitals for treatment. The death toll is expected to rise from the initial six.

All of the casualties were either full-time employees of Samsung Heavy Industries or contract workers of subcontractors.

“I was on the job when something suddenly struck my back,” said one injured worker. “I fell forward and I received injuries on my arm and part of my face.”

“The tower crane fell off its perch while moving a large yellow-colored object,” another worker recalled, “and the fallen object and the crane’s metal chain hit people.”

According to the injured, break times were between 10:00 a.m. to 3:00 p.m., with 100 people normally congregating at the site of the accident where the bathrooms and smoking room were located.

“Eyewitnesses said that after the crane was moving, it bumped into the nearby dry dock’s 800-ton goliath crane and struck the offshore platform that was under construction,” said a firefighter.

Samsung Heavy Industries was constructing a $500 million offshore platform for Total, a French energy multinational. The order was made in December 2012 and delivery was scheduled by June.