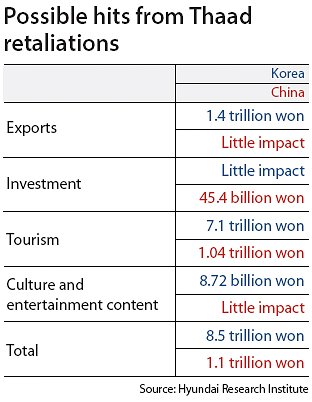 The economic losses Korea suffers from Chinese blowback over a U.S. antimissile defense system could reach 8.5 trillion won ($7.5 billion) for this year alone.

The economic impact on China could be a mere 1.1 trillion won.

According to the Hyundai Research Institute, the economic losses to Korea from China’s retaliations for the deployment of the U.S. Terminal High Altitude Area Defense (Thaad) system will be equivalent to 0.5 percent of the nation’s nominal GDP through the end of this year.

The corresponding losses for China would account for a mere 0.01 percent of its nominal GDP.

The think tank said the industry that will suffer the most from tension with China will be tourism. Assuming that the number of Chinese tourists shrinks 40 percent between April and December of this year, the annual loss for the tourism industry is estimated at 7.1 trillion won. That’s 84 percent of the total losses for Korea in 2017.

Group tours from China have been choked off since March. The number of Chinese visiting Korea that month dropped 40 percent from 601,671 a year ago to barely above 360,000 this year, according to the Korean Ministry of Culture, Sports and Tourism. Despite a slight increase in Japanese and Southeast Asian tourists, foreigners visiting Korea in March dropped 11 percent from 1.39 million in 2016 to 1.23 million this year.

The pain will extend the other way, but by a much smaller amount.

China is likely to face a 1.04 trillion won loss if the number of Korean tourists traveling there shrinks 20 percent for 2017, as is expected.

China’s furious retaliations have had little impact on Korea’s exports there.

Products denied entry to China were mostly limited to cosmetics and food products. Demand for high quality machinery and computer chips has been increasing as Chinese companies upgrade their automated production facilities.

According to the think tank, if the current tensions continue, Korea could face 1.4 trillion won in losses in exports to China this year. Chinese exporters to Korea are unlikely to feel any pain.