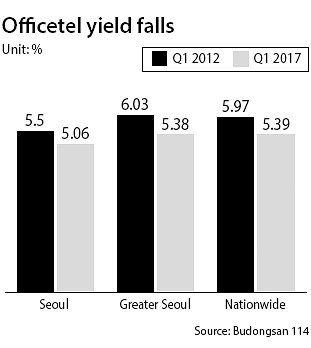 A long queue formed in front of the Daechi 3 Cha I’Park officetel model in Gangnam, southern Seoul, recently. Some of the people lined up before dawn and the place was packed until 11 p.m.

Four days later, interested buyers turned in their bids for the limited number of units available to purchase. The average ratio of bidders to units was 52 to 1 while some of the more popular units had 263 bidders to a unit.

“[The officetel] is only 3 minutes away from Samseong station line No.2 by walking distance and it is surrounded by convenient facilities including COEX and Hyundai Department Store,” said an official of HDC I&Cons, an affiliate of the construction company Hyundai Development Company (HDC) that owns the I’Park brand.

“I was told that a 30 million won [$26,500] premium was instantly attached on preconstruction sales of the 2 Cha I’Park [officetel] last year,” said Choi Sun-young, one of the visitors at the model house. “3 Cha I’Park is a very attractive investment as it is located in very good surroundings.”

Hanwha E&C also accepted bids for its Gwanggyo Convention Kkumegreen officetel units in Gwanggyo New Town in Suwon for two days last month. More than 64,700 people bid for 746 units on sale, bringing the average competition for a single unit to 86 to 1.

Like at the officetel in Gangnam, long lines formed before the sun rose. The officetel drew a lot of interest from investors in an area that will contain a department store, aquarium, a hotel and a convention center.

The officetel market in Gangnam and Gwanggyo has been heating up as real estate investors have struggled to find lucrative investments as the government has been tightening its grip on the preconstruction sales of apartments. The heated market last year drove up household debt, which is already at a record high. Government officials have been trying to decelerate the growth of new household loans as it may disrupt the financial market and even spill over to the overall economy once the record-low interest rates are normalized.

Officetels, which can be used as an office or as a residential unit usually occupied by two or fewer people, have been attracting investors as cheaper alternative property investments to apartments such as commercial stores or buildings.

The officetel market has been expanding since 2010 when the government eased regulations after the market was faced with a shortage of jeonse or long-term deposit apartment.

Real estate market research company Budongsan 114 projected that the officetel market will continue to grow as long as the interest rate remains low.

“[Anyone] can enter the officetel market with even a small amount of investment,” said Ham Young-jin, head of the research team at Budongsan 114. “Especially some of the hot places like Gangnam in Seoul and Pangyo and Gwanggyo in Gyeonggi are considered investments with high value.”

However, the return on investment may not be what investors expect as there is a huge supply of officetels.

In fact, the yield on leasing officetels to investment in the first quarter of this year was 5.39 percent, a 0.25 percentage point drop from a year earlier. This rate has been falling since the second quarter of 2014.

Sales of officetels in March were 149.8 billion won, a 38 percent drop year-on-year.

Market experts say when investing in officetels, the most important factor is location. The most popular ones are close to subway stations.

“Even in the same neighborhood the profit return on officetel [investment] can be different depending on the surrounding area,” said Kim Soo-yeon, head of the research team at Dr.Apt, a real estate research company. “It would be best to invest in officetels that are located near the subway station or those in the center of commercial zones.”