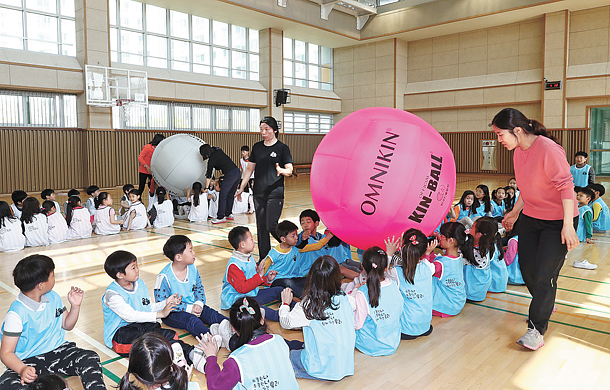 Second graders from the Seoul Woosol Elementary School in Seocho District, southern Seoul, play a game in the gym after the school moved its field day inside due to heavy air pollution. [KIM HYUN-DONG]

More schools in Seoul are holding their spring field days indoors or cancelling them due to heavy air pollution.

The Seoul Woosol Elementary School in Seocho District, southern Seoul, was scheduled to host its spring field day on Monday, an annual event in which students spend the day on the school grounds playing sports and competing in games. Its grounds were empty when a reporter arrived Monday morning.

“We changed our plans at the last minute because the air pollution reached the unhealthy level in the morning,” said Choi Mi-yeon, vice principal of the school. “We moved the field day to the school gym.”

Second graders in blue and white jerseys cheered teams jumping over hurdles inside the gym.

Because the gym wasn’t nearly as big as the school’s outdoor playing grounds, grades had to take turns with their games over a three-day period.

“Parents couldn’t attend this year because the gym can’t accommodate both the students and parents,” said Lee Seung-eun, a 44-year-old parent of a first grader. “Some of my best memories from school are of these games held outside on field day. It’s so sad that these events are being shrunk down and minimized because of air pollution.”

Sindaerim Elementary School in Yeongdeungpo District, western Seoul, held its field day on Tuesday, but scrapped sprint relays. Sprint relays are usually the climax of the day, and students and parents cheer together for their favorite teams.

Just a day before, a parents’ committee expressed its concerns about kids sprinting and inhaling the fine gunk in the air.

“In the end, the school decided to scrap the race and replace it with indoor games like hopscotch and hoopla (ring toss),” said a staff member of the school.

Another elementary school in Yangcheon District, western Seoul, changed the date of its field day from Monday to May 15, hoping for cleaner air.

Parents received text messages announcing the date change Monday morning due to the “very unhealthy” level of PM2.5 fine dust particles in the air, or more than 101 micrograms per cubic meter (35 cubic feet) of air.

“We couldn’t resort to using the school gym because we share it with a kindergarten in the vicinity and it had booked the gym for the day,” said the vice principal of the school.

“I knew it could happen but the news was too much for my boy, who woke up early and was all dressed up in his sports uniform,” said a 45-year-old parent of a student of the school. “He cried all morning and I had a hard time cheering him up.”

An elementary school in Gyeyang District of Incheon delayed its field day and another in Paju, Gyeonggi, moved the activities indoors.

The difficulties are greater for schools without a gym.

“We covered the school’s dirt field with salt on Friday because that would stop the dust from rising into the air during the games on field day,” said Lee Sang-bong, principal of the Seoul Yongma Elementary School in Gwangjin District, eastern Seoul. The school does not have a gym.

“We also had a teacher-parent meeting on Monday, a day before our field day, because the PM2.5 fine dust concentration on Monday had reached the unhealthy level,” he said. “It’s very difficult for schools without gyms to host a field day during the spring season. We’re thinking of moving the annual field day to the fall season.”

The Ministry of Education tightened regulations on school activities at times of heavy air pollution. Until March, elementary, middle and high schools were asked to cancel outdoor activities when the government issued an air pollution warning.

An air pollution warning is issued when the hourly average of PM2.5 fine dust concentration exceeds 90 micrograms per cubic meter of air for more than two hours. In other words, schools were asked to scrap outdoor activities if there were more than 180 micrograms of PM2.5 fine dust particles per cubic meter of air over two hours.

In addition, since April, the ministry told schools to scrap outdoor activities at the moment the PM2.5 fine dust concentration enters the unhealthy level, or 51 to 100 micrograms per cubic meter of air.

“Schools in general struggle find it difficult to respond immediately because the government-issued air pollution forecasts often turn out to be different from the actual state of air pollution,” said a principal of an elementary school in Gangbuk District, northern Seoul. “And it’s not easy for the school board to reach a consensus with the parents on how best to respond in times of severe air pollution.”

Some experts called for more assistance from the central government.

“The Education Ministry needs to tighten regulations for the sake of the students and realize the lack of facilities like gyms in some schools,” said Kim Jae-cheol, a spokesman of the Korean Federation of Teachers’ Associations. “The government needs to help some schools build more facilities for students in times like this.”