Just say you were kidding

Just say you were kidding 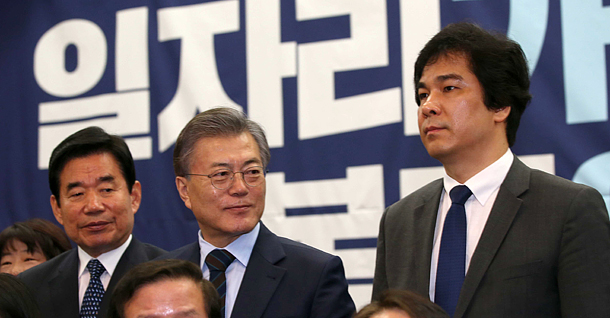 Moon Jae-in of the Democratic Party, the frontrunner in the polls ahead of the May 9 presidential election, pledges to create 170,000 jobs in the public sector. [JOINT PRESS CORPS]

I would like to ask the next president to do one thing before he or she is elected. The new president should promise to undo some campaign promises. The race had been similar to the last one four year ago. Contestants made generous and exorbitant promises. We would need from 200 trillion won ($176 billion) to 500 trillion won to finance their campaign pledges. None of the candidates spoke of the means of financing these vows. A campaign pledge is hard to break once elected. It would be better to drop the most controversial or questionable promises before voters hit the polling booths.

Moon Jae-in, the unrivaled leader in the polls, should set an example. He has promised to stretch the quota for government employees to 170,000 in order to pull up employment. Even his campaign chief questioned that plank in his platform.

I am not only talking about the cost. This idea can set a poor precedent. If it helps win votes, contestants in future election would surely promise more hiring of government employees. Greece, where one out of every 10 worker is a public employee, has gone bankrupt. Public finances will be wrecked by generous welfare and pensions for public employees. Greece is still at the mercy of the European Union. It had to promise additional cuts in pensions and its budget to receive a third bailout. It no longer can protest the austerity prescriptions by the EU.

The public has lost any excuse to strike. Greece at least has the EU to turn to. We are surrounded by selfish global powers. U.S. President Donald Trump wants Seoul to pay for the U.S. Terminal High Altitude Area Defense battery unit brought to Korea to protect U.S troops. Chinese President Xi Jinping reportedly told Trump, who is obviously ignorant about the history of East Asia, that Korea used to be part of ancient China. Japanese and Russian leaders Shinzo Abe and Vladimir Putin have little compassion for their neighbors. If we flounder, we could be deserted or torn up by neighboring powers.

Fiscal integrity along with foreign exchange reserves serve as the last protection for a vulnerable economy like ours. We must safeguard them no matter what. We suffered a liquidity crisis in 1997 not just because of weak fundamentals, but also from international politicking. We fell because we did not have foreign exchange protection. If we had enough reserves, Korea Inc. would not have had to hold a fire sale. The public would not have had to tighten their belts and thousands in the financial sector would not have lost their jobs. We were able to combat the crisis within two years because we still had strong public finances.

Due to overly generous campaign promises in the last election, Korea’s spending on social welfare would exceed Greece’s within the next two decades. If welfare expenditures increase from this election, public finances will be ruined in no time. Of 1,430 trillion won ($1,262 billion) worth of national debt, half of it, or 752 trillion won, is reserved to cover deficits in government employees and soldiers’ pensions. Of the 140 trillion won surge in national liabilities last year, 92 trillion won was caused from pension losses. Household debt also exceeds 1,300 trillion won.

Yet presidential candidates justify their spending pledges by claiming that the Organization for Economic Cooperation and Development advises Korea to increase public spending. But what the OECD advises is to increase fiscal spending to stimulate the economy, not bolster welfare benefits. Some candidates say the economy will grow with stronger social welfare. They champion so-called voodoo economics, or supply-side economic theory, and argue growth will come on the heels of increased incomes. This populist platform, regardless of its unreasonableness, seems to sell.

The global economy has picked up this year. Hopeful signs also are seen in the local economy. Exports are doing much better than expected, helping to deliver stronger gross domestic product growth in the first quarter. The Korean stock market is flirting with historic highs.

But our politics remain moronic. Populism expands with every election. A candidate who walks away from a past pledge could help end this vicious cycle. We plead for sense so we can start a new administration in a leaner way.