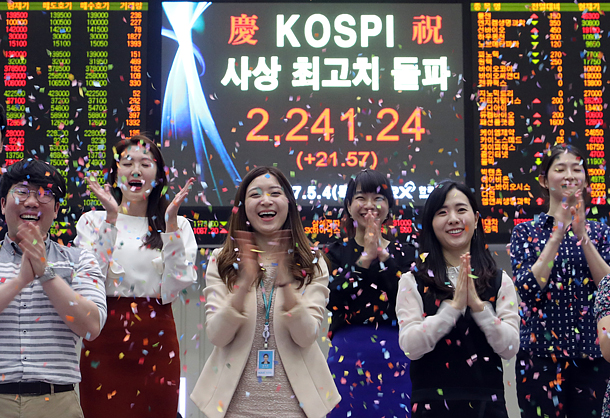 Staff at Korea Exchange celebrate new intraday and closing records set by the Kospi Thursday at the office of the trading operator in Yeouido, western Seoul. [YONHAP]

The Kospi hit a record high Thursday, led by a combination of a rally for Samsung Electronics shares, good global and domestic economic indicators and strong results by market heavyweights in the first quarter.

Korea’s main bourse touched fresh records during trading and closed at 2,241.14, up 0.97 percent from the previous day.

Thursday’s index represents the latest in a series of rallies starting at the end of April.

Analysts said the upward momentum was primarily attributed to the better-than-expected corporate earnings in the first quarter.

Ahn Hyun-guk, a researcher at Shinhan Investment, noted that only 94 out of 779 Kospi-listed companies have released first quarter financial records, but their combined net profits already are the equivalent of 99 percent of the profits in the same period last year.

“We estimate that the remaining companies’ net profit in the first quarter will be around 8 trillion won. Even if we take a more conservative approach, the Q1 record will be at least 33 trillion won, which is a record aggregate corporate net profit.”

The researcher said that the banking sector in particular enjoyed unusual buoyancy, and its aggregate net profit was 808 billion won more than the market’s expectations.

But if narrowed down to a single stock, market bellwether Samsung Electronics is the rally’s major driver.

Other tech companies such as Internet giant Naver and chip maker SK hynix helped the bullishness.

Korea’s exports saw their steepest growth in nearly five and a half years last month and reached their second-highest historic level, driven by stellar performance in semiconductors.

Investment in facilities and equipment registered healthy growth: 12.9 percent in March compared to the previous month. Consumer and business sentiment are on a gradual rise.

Analysts believe that the upward trend will continue.

“Exports will continue to improve due to the recovery in global trade and the benefits associated with lower commodity prices,” said Park Sang-hyun, an economist at HI Investment & Securities.

“The U.S. economy grew at a slow pace in the first quarter, but growth in Europe and emerging countries remained strong,” Park said.

The economist did cite lingering risks such as protectionist sentiment in trading and China’s retaliatory actions over the U.S. antimissile system deployed in Korea.