Xi’s red line on the peninsula

Xi’s red line on the peninsula 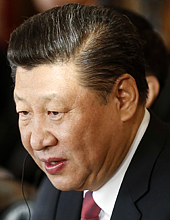 When the Soviet Archives were declassified in the 1990s, many mysteries surrounding the Korean War were revealed. Among them, two things are especially noteworthy. Why was the Soviet delegate absent in the UN Security Council vote on sending UN Forces? And why did Mao Zedong decide to participate in the Korean War instead of heading to Taiwan when reunifying with Taiwan was imminent?

Alexander Pantsov, a history professor at Capital University in Columbus, Ohio, wrote in his book “Mao: The Real Story” that the key in the two mysteries is Stalin. In the global strategic perspective of world revolution, Stalin calculated that the United States wouldn’t be able to focus on Europe if it is caught up in a war in the Far East. In the meantime, Stalin wished to secure the Eastern bloc under its influence and export Bolshevik Revolution to the Balkans, Indochina and Southeast Asia.

Mao promised Stalin to send reinforcements but faltered at least five times. In July 1950, when the People’s Army marched down to the Nakdong River, Zhou Enlai was eager to participate and asked the North Korean military leaders to send a map of the Korean Peninsula and samples of uniforms to disguise as North Korean troops.

But the Battle of Incheon changed the course of the war. In October, Zhou changed his mind and claimed that China should not be drawn into the war. Commander Lin Biao and party executives opposed that China was inferior in military strength and it may lose a critical chance to reclaim Taiwan.

The Seventh Fleet of the U.S. had already blocked the Taiwan Strait in preparation for Chinese forces’ landing after North Korea’s southward invasion. Mao was compelled by Stalin and had to leave Taiwan behind and cross the Aprok River, analyzed Professor Pantsov.

The northern half of the Korean Peninsula, which China considers a necessary buffer, is tangled in the history of giving up reclaiming Taiwan. U.S. President Donald Trump initially played the One China policy but stopped his provocation after the summit with Chinese President Xi Jinping. It can be deduced that Trump tossed the ball into China’s court by pressuring Beijing to resolve the crisis in the North Korea. It is unknown what role China played, but April passed without an incident.

In case of sudden changes in the North, China’s People’s Liberation Army (PLA) could reach as far as the Chongchon River-Hamhung line, the bottleneck of the peninsula, with a justification to build refugee camps, said Dr. Bruce Bennett at the RAND Corporation. He projected that the PLA could push down even to Pyongyang to the Nampo-Wonsan line if China has an intention to set up a puppet government of Chinese Communist Party. He warned that if such movements are detected, the Korea-U.S. alliance would not condone it but immediately break through the Demarcation Line and move northward.

The Taiwan Strait, the other side of the coin, would also be drawn into the whirlpool. Trump reminded Xi that’s the “red line” when intervening in North Korea affairs.