A search for love that everyone can relate to

A search for love that everyone can relate to 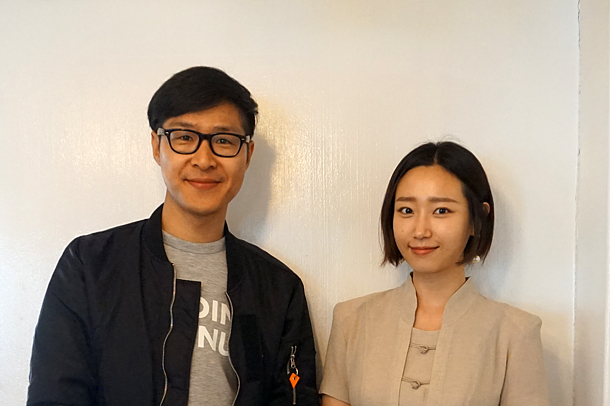 JEONJU, North Jeolla - For directors, their first full-length movie is especially meaningful. Even before the opportunity to direct their first feature film arises, they at least have a vague idea of what kind of genre they wish to work on. Though some fail to fulfill that wish, others manage to make it come true. Rookie director Hwang Kyu-il was lucky enough to make his dream come true through a witty romance drama “Saem,” which competed in the Korean Competition section at the 18th Jeonju International Film Festival (JIFF).

Starring Choi Jun-young (“AV Humanities”) and Ryu Sun-young (“Our Love Story”), “Saem” is a witty romance movie that unfolds as Dusang (Choi) comes to Seoul to find his first love Saem. Since he suffers from face blindness, he cannot tell the differences in how people look, and therefore, tries to rely on people’s unique characteristics, like scent, to recognize Saem.

One day, Dusang is hit by a mysterious woman (Ryu) who he believes looks like his first love. Taking advantage of Dusang’s disability, the woman keeps on reappearing in front of him, pretending to be a different person each time to steal his money until she starts to develop feelings for him.

“Through Dusang, I wanted to deliver a story of an imperfect man who finds his true self and rediscovers the value of innocence by going on a journey to find his first love,” Hwang, who was behind the camera of short films like black comedy “AV Humanities” (2016) and drama “The Butterfly Which Was Here Now” (2011), told Korea JoongAng Daily during an interview last week at a cafe in Jeonju.

“One of the main goals I had before making the film was to make a movie that people can laugh over together in the theater,” said Hwang. “‘Saem’ is a witty comedy movie revolving around love. Anyone from a homeless person out on the street to a drunk office worker passed out on the subway has first love, and I hoped to bring back audience’s memory of their first love through the movie.”

Though playing three roles in a single film was not easy, Ryu was able to pull it off by focusing on her relationship with Dusang instead of trying to deliver the details on different roles she plays.

“I thought that what matters most in the movie is the relationship between my character and Dusang instead of the details of what kind of a person she is. So I tried not to over-exaggerate the roles’ differences,” Ryu explained.

Although both Hwang and Ryu have not made definite plans of what they will do in their careers, they at least have clear goals on what they want to achieve in the film industry.

“Instead of art films, I hope to make commercial movies that even my nephew and niece can enjoy. I want to work on films that can be screened at many cinemas,” said the filmmaker.

For Ryu, who most recently worked on a short film revolving around Jeju Island’s April 3rd Uprising in 1948, she hopes to work on a variety of independent films that can provide more diverse stories to moviegoers.

“I believe audiences have the right to enjoy movies of diverse genres, and I hope to be able to contribute in expanding their choices through my participation in a variety of independent movies.”