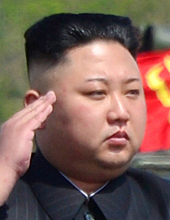 Cracks in the alliance between North Korea and China widened Thursday as Pyongyang labeled its longtime communist ally a traitor, while Beijing expressed skepticism about renewing a 56-year old friendship and mutual assistance treaty.

The North’s state-run Korean Central News Agency issued a commentary on Wednesday that included a rare and blunt attack on China. The commentary said China had violently crossed a “red line” in their relationship. “It is a “disloyal and betraying act,” it said.

The North “will never beg for the maintenance of friendship with China, risking its nuclear program which is as precious as its own life, no matter how valuable the friendship is,” the commentary also said.

In an attempt to avoid a formal diplomatic feud, the North issued the commentary in the name of a private citizen, Kim Chol, rather than having it come from a government official or entity.

The statement was the North’s response to China’s intensifying pressure over its nuclear arms program. After a series of strategy meetings by top Chinese officials including Foreign Minister Wang Yu and Fu Ying, chairwoman of the Foreign Affairs Committee of the National People's Congress, Beijing reportedly decided to bolster its sanctions and pressure on the North while creating a mood for talks at the same time. A series of measures were taken since late April to implement the plan.

Fu also published an essay on the Brookings Institution website earlier this week to send a message to both the North and the United States. “Powerful states may have greater influence over the international situation, but they should also bear the consequences of what they say or do. Smaller or weaker states may counter or respond to pressure from powerful states, but there is a price to pay for doing so,” she wrote.

China’s pressure on the North includes implementation of new trade sanctions. All cargo to the North is being checked at the North Korea-China border, a change from random checks, Radio Free Asia reported. The searches were conducted without increasing the number of customs officials.

The new inspection policy will create a serious bottleneck for North Korean trucks, which formerly arrived at Dandong, China, in the morning and returned home in the afternoon. Smuggling goods and cash into the North will also become much harder, the report said.

In an editorial, the newspaper said the treaty was intended to promote bilateral cooperation and friendship as well as regional peace and security, and the North’s nuclear development goes against those principles.

China is expected to continue its efforts to pressure the North while promoting dialogue at the same time. Chinese Foreign Ministry spokesman Geng Shuang said Wednesday that UN Security Council had an in-depth discussion last week on the North Korea issue and “most of the Security Council members put stress on both nuclear non-proliferation and peace talks.”

Chinese President Xi Jinping had a telephone conversation with President Rodrigo Duterte of the Philippines and discussed tension on the Korean Peninsula. The Philippines is the chair of the Association of Southeast Asian Nations (Asean) this year.

“China is acting between the United States and North Korea based on its own tempo,” said Hwang Jae-ho, a professor of international studies at Hankuk University of Foreign Studies. “And China-North relations were always bad after Xi and Kim Jong-un took power. It won’t be any worse.”