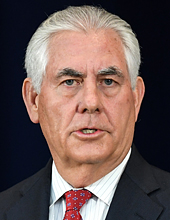 WASHINGTON, D.C. - The United States hinted at a possibility of guaranteeing the security of the North Korean regime in return for denuclearization, a change from Washington’s previous stance that all options remained on the table, including a military strike.

U.S. Secretary of State Rex Tillerson said Wednesday that North Korea and its nuclear programs are the top priority of Washington’s foreign policy. In remarks to employees of the State Department, he said Washington has put intense pressure on the North not because it wants to end the Kim Jong-un regime, but to end his nuclear programs.

“We are preparing additional sanctions, if it turns out North Korea’s actions warrant additional sanctions. We’re hopeful that the regime in North Korea will think about this and come to a conclusion that there’s another way to the future,” Tillerson said. “We know they have - they’re - they aspire to nuclear weapons because it’s the regime’s belief it’s the only way they can secure their future.

Until recently, many officials of the Donald Trump administration stressed that all options were on the table, seen as a reminder that the United States was considering military measures. The latest such remark was made by the commander of the Special Operations Command before Congress on Tuesday.

In testimony to a House subcommittee, General Raymond Thomas said U.S. special operations forces are set to conduct operations against the North’s nuclear and missile facilities, the U.S. media reported.

Tillerson’s remarks on Wednesday, however, were more specific about what Washington is willing to offer if Pyongyang gives up its nuclear programs. “The remark was a de facto notice that the United States will not push forward a reunification in which the South will absorb the North,” said Yang Moo-jin, a professor at the University of North Korean Studies. “The precondition is that the North gives up its nuclear programs.”

Tillerson’s remarks also made clear the central elements of the Trump administration’s North Korea policy, summarized as “maximum pressure and engagement.” While maximum pressure means the inherent threat of military strikes, maximum engagement could mean bilateral talks between the United States and North Korea to guarantee the security of the Kim regime.

To have direct talks with the Kim regime, human rights will be another factor. Last year, the Obama administration imposed sanctions on Kim personally by blacklisting him for human rights abuses. Tillerson hinted at a possible change on Wednesday, sending a signal that Washington will reduce its emphasis on human rights.

Tillerson still said the Trump administration won’t talk to the Kim regime for the sake of talking. “We are ready and prepared to engage in talks when conditions are right. But as you’ve heard me say, we are not going to negotiate our way to the negotiating table,” he said. “That is what Pyongyang has done for the last 20 years, is cause us to have to negotiate to get them to sit down.”