A pledge to resist protectionism

A pledge to resist protectionism 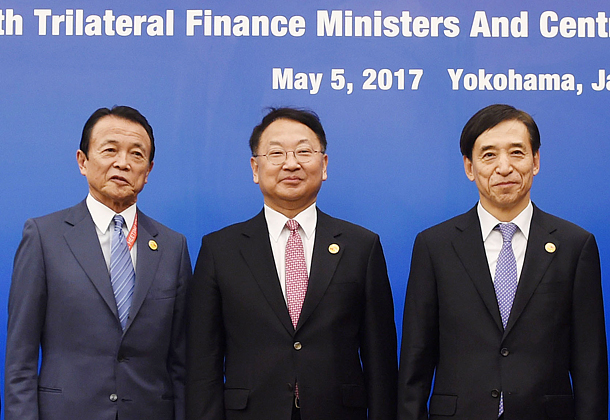 Economic leaders from Korea, Japan and China met in Yokohama Friday, and jointly vowed to “resist all forms of protectionism.”

According to the Ministry of Strategy and Finance on Friday, the three countries agreed that trade is their most important growth engine as it improves productivity and create jobs.

The three Asian trade powerhouses are concerned about rising protectionism in the United States and Europe.

“We agree that trade is one of the most important engines of economic growth and employment, which contribute to productivity improvements and job creations,” the three nations said through a joint statement made at the 17th Trilateral Finance Ministers and Central Bank Governors’ Meeting. “We will resist all forms of protectionism.”

Shim Kyu-jin, a director at the Korean Finance Ministry, said in the past the trilateral meeting focused on financial cooperation, but this year the leaders discussed even non-economic issues.

“Korea, China and Japan have announced a clear message that they will condemn any type of protectionism to guard the idea of free trade and we think this idea will be able to spread to even G-20 meetings,” said Shim.

In a statement issued by the financial chiefs of the G-20 economies in March, a line against protectionism was ultimately dropped.

The three countries also agreed to expand financial cooperation to deal with possible risks coming from abroad. The Korean Finance Ministry said they discussed various uncertainties such as possible interest rate hikes in the United States, protectionism, along with other geopolitical risks.

“We will continue a high degree of communication and coordination among China, Japan and Korea to cope with possible financial instability in the context of increased uncertainties in the global economy and geopolitical tensions,” Yoo said at the meeting, according to the Finance Ministry.

The next trilateral meeting will be held in the Philippines in May 2018.

Meanwhile, Korea’s Trade Minister said Thursday that the government is preparing for all possible scenarios, including renegotiation of the free trade deal with the United States.

“The government has been preparing for various trade scenarios with the United States, including renegotiation of the FTA,” said Joo Thursday.

“Both private and public sectors need to cooperate with each other to strategically respond to possible changes.”

The meeting came after U.S. President Donald Trump said in an interview last week that he will fix the FTA between two countries, calling it “horrible.”

The Korea Economic Research Institute, a private think tank, estimated that Korea’s exports to the United States could drop $17 billion over five years if the two countries renegotiate the deal.