An office space at a building in central Seoul remains empty in this photo taken recently. In this region, one in six offices is vacant. [JOONGANG ILBO]

In Seoul, there are many regions like this. The central regions like Jongno and Jung Districts and Yeouido are facing this situation.

Local construction giant Booyoung Group acquired Samsung Life Insurance’s headquarters in central Seoul, last year. But the vacancy rate of the building now more than 70 percent. It has been more than six months since Samsung Life Insurance moved to the Samsung’s headquarters in Seocho, southern Seoul, but the vacancy rate issues there haven’t been solved.

“I don’t know if we will be able to fill the offices since there are many newly constructed building in the neighborhood,” said a representative at a real estate firm near the building. 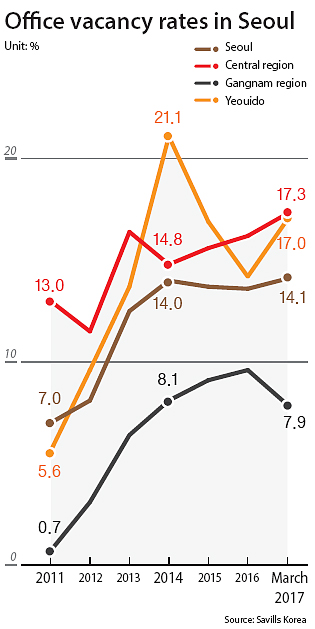 Savills Korea, international real estate adviser, said the vacancy rate at large office buildings in Seoul that are bigger than 30,000 square meters (322,917 square feet) reached 14.1 percent in the first quarter of this year. This is 1.3 percentage points higher than the previous year.

The biggest reason for the high vacancy rate is the many newly constructed office buildings in Seoul. Even though demand for offices dropped significantly after the global financial crisis in 2008, many construction firms started projects to redevelop towns by demolishing old buildings and build new ones starting three to four years ago.

Many firms believed that they would attract rents from new buildings since the demand was high when they started projects. Those properties are now on the market, but the situation has changed.

“The supply of buildings is exceeding demand in central Seoul due to the many reconstruction projects,” said Yoo Myung-han, a researcher at Colliers International Korea.

Furthermore, the number of people looking for property has declined. The giant renters like large companies are moving from central Seoul and Yeouido to other regions. Samsung Life Insurance and Samsung Fire & Marine Insurance moved to the Samsung headquarters in Seocho-dong, southern Seoul, last year. Securities firms like Daishin Securities Mirae Asset Daewoo also left Yeouido. Many are relocating to reduce costs.

Landlords have raised rent prices, claiming their buildings are brand-new.

According to Korea Appraisal Board, rent prices in central Seoul rose 15 percent year on year to 93,000 won ($81) per 3.3 square meters. Fewer people are starting businesses due to the sluggish economy and those who do so try to avoid offices in central Seoul nowadays.

According to Cushman & Wakefield, the expected vacancy rate in central Seoul continues to rise. It is expected that there will be more empty buildings and it will eventually lower rent fees.

Some disagree. “The vacancy rate in Yeouido will remain high as there are many supplies while many companies are moving away,” said Kim Jung-eun, a spokesperson at Savills Korea. “But central Seoul is very popular among companies so I don’t think the rate will go up rapidly.”