Why May is the best time to buy a new car

Why May is the best time to buy a new car 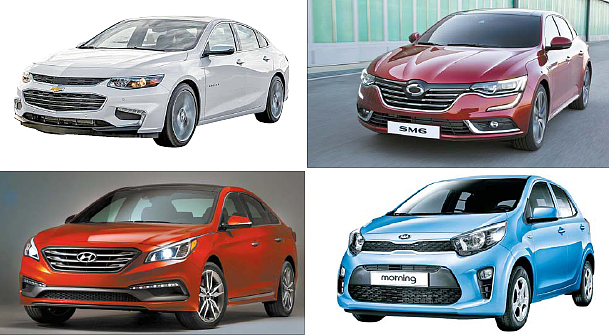 Local carmakers are offering various discounts and cash prizes over the so-called golden holidays in May. Buyers of an array of cars including GM Korea’s Malibu, Renault Samsung’s SM6, Hyundai’s Sonata New Rise and Kia’s Morning, from left, are eligible for the benefits. [JOONGANG ILBO]

Thinking about buying a new car? May might be the best time.

Korean carmakers are offering an array of deals and incentives this month. May has traditionally been one of the best months for car sales but the days for dealers to sell autos are numbered due to the lengthy holidays that started on Labor Day and will until May 9, Election Day.

Top player Hyundai has widened the types of cars on discount during the so-called golden holidays. Drivers who purchase a car - with the exception of hybrids including Ioniq and high-end vehicles such as latest Grandeur and the Genesis G80 - by May 12 and have the car shipped by the end of the month will receive a discount of 200,000 won ($177).

Some models come with more incentives. A 2017 model of a Sonata sedan offers an additional 10 to 15 percent discount, applied to the first 2,000 orders. Hyundai is rushing to sell the model, which suddenly became old after the 2018 edition of the Sonata New Rise was released in March.

If you’re considering purchasing a Kia Motors vehicle, hurry. The first 5,000 vehicles will be sold through a promotion titled “May Love Festa.” The number of cars eligible for the promotion and discounts vary according to models. The Pride compact, for instance, offers 5 to 15 percent off on up to 500 units, while the K3 compact sedan is 5 to 10 percent off on 2,000.

For Kia’s recently upgraded compact Morning, those who order the vehicle by May 12 may receive 400,000 won in cash, which is equivalent to the auto tax for five years, plus another 300,000 won in cash.

GM Korea has launching a “Love Family” promotion. Buyers of Chevrolet’s Malibu sedan are eligible for 1.2 million won in discounts when purchased on an installment plan of up to 60 months.

Drivers who have owned their vehicle for at least seven years can receive up to 300,000 won in subsidies and owners of compact vehicles that are 10 or older may receive 500,000 won subsidies. When all discounts and benefits are applied, a Captiva will cost 4.43 million won, an Impala 3.71 million won and a Malibu can be purchased for 3.11 million won.

“We are offering exceptional discounts and cash prizes with the advent of May,” said a GM Korea spokesman.

Renault Samung is concentrating on benefits to those who are trying to replace their vehicles that are five or older. The discount varies from 300,000 won (for SM3 and SM5 sedans) to 500,000 won (QM3 and QM6 SUVs).

The carmaker is also giving a free black box or glass window tinting, in addition to a tablet navigation device.

SsangYong is providing discounts, cash prizes and freebies on popular models such as the Tivoli, Korando C and G4 Rexton. The latter offers a five-year/100,000 kilometer warranty on up to 72 months of payment at an interest rate of between 4.9 percent and 5.9 percent. Special leasing programs are also available; the latest SUV is available for 160,000 won a month.