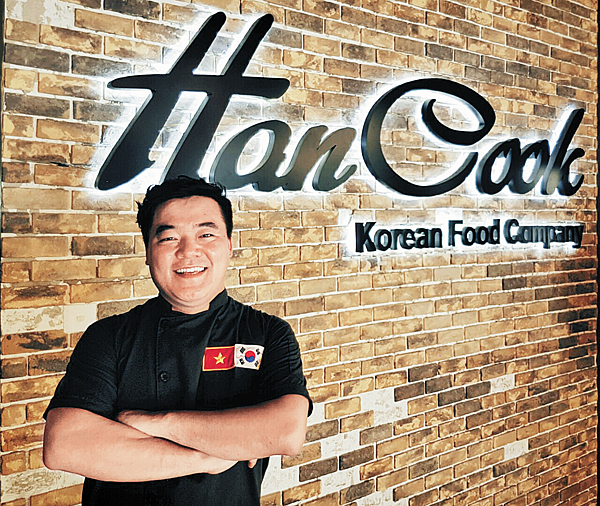 In Da Nang, Vietnam, there is a Korean entrepreneur whose chain of restaurants are phenomenally profitable - largely thanks to 12,500-won ($10.97) servings of dalkgalbi, a Korean stir-fried chicken dish.

Lee Joo-hyung, 36, is the founder and CEO of the Hancook restaurant chain in Da Nang.

His first location has monthly sales of 30 million won and a 60 percent rate of profit. None of his four restaurants make less than 45 percent.

That’s way above the average back home. According to the Korea Agro-Fisheries & Food Trade Corp., average sales for Korean restaurants in 2015 were 126.5 million per month and the average rate of profit was 17 percent.

Koreans in Vietnam nicknamed Lee the “Baek Jong-won of Da Nang,” a comparison to Korea’s most successful restaurateur.

The main dishes on the menu were Korean standards: gimbap (seaweed and rice rolls), tteokbokki (spicy rice cakes) and dakgalbi.

“Vietnamese had a keen interest in food that Koreans enjoy on a daily basis thanks to hallyu,” Lee said, referring to the so-called Korean wave of cultural content such as television dramas. The first two months actually weren’t profitable as Da Nang locals were cautious about eating Korean food.

Luckily, a major resort opened in Da Nang and foreign tourists poured in, including Koreans.

Now, Hancook’s branches have queues of people waiting to get inside.

Lee started off with 150 million won, and used 100 million to start the first restaurant.

When profits started rolling in, he opened the second restaurant and then a third dedicated to samgyeopsal, grilled pork belly.

The fourth a barbecue restaurant trendy enough to pass as a hotspot in Hongdae.

Apart from the food, everything else in the restaurants is strictly Vietnamese. Among the 150 employees in the company’s headquarters, a factory that makes sauces and its branches, there are only two Koreans including Lee.

Today, each of Hancook’s branches have monthly revenues between 30 million and 50 million won.

“My belief is that Korean food should not be sold at an excessively low price, because the food we sell at Hancook represents our country,” explained Lee. “The goal is to expand the number of branches to 12 this year and 100 by 2020.”