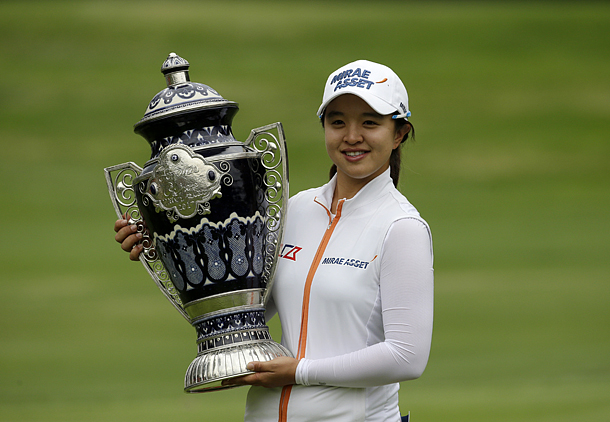 Kim Sei-young poses with a trophy after winning the Citibanamex Lorena Ochoa Match Play in Mexico City on Sunday. Kim won 1-up against Ariya Jutanugarn of Thailand to win in match play. [AP/YONHAP] 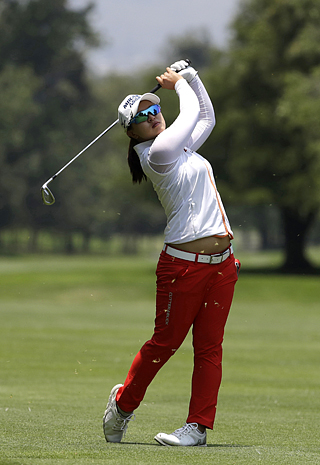 “It was a really tough day,” Kim said during an interview quoted on the LPGA website. “I never had such a hard win. I am happy that I was able to win and hold this trophy.”

Kim got off to a good start with a birdie, eagle and a birdie in her first three holes to take a three-up lead, and never allowed a lead to Jutanugarn throughout the round. It seemed like an easy win for Kim up until the 14th, when she made a bogey.

Shortly after, Kim hit her tee-shot out of bounds on the 17th while Jutanugarn made a birdie, putting Kim one-up with one hole left.

“I tried to stay calm but I really couldn’t,” Kim said after the round. “My hands were shaking, my legs were shaking. It was really hard to keep calm.”

On the 18th, the two both hit their second shot 10 meters (32.8 feet) to the pin. As the two missed their birdie putts, Kim won the tournament.

Not only was this Kim’s first win of the 2017 season, this is also her first LPGA tour win in 11 months and her first win in a match play event.

Kim, who made her LPGA tour debut in 2015, won three tournaments in her debut season and won the rookie of the year award. Last year, she won two tournaments.

Despite her outstanding seasons, she struggled in the start of the 2017 season but with the win, Kim has regained her confidence.

Prior to her victory on Sunday, her third place finish at the Honda LPGA Thailand was her only top-10 finish and last week in Texas, she missed the cut. 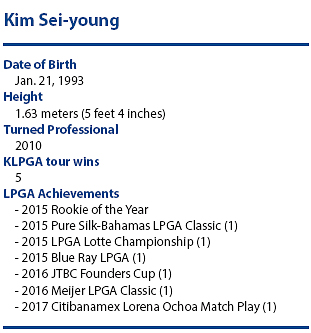 “I am really pleased, because it’s been one year that I have not played good,” Kim said. “I got really disappointed, and even last week, I missed the cut. But this week I bounced back and had a really good result. So, I’m really happy with that.”

A win this weekend will now move Kim’s world ranking back into the top ten.

Prior to the match against Jutanugarn, Kim played the semi-final round match against Hur Mi-jung, who had defeated Lydia Ko in a major upset, and won five up with four holes remaining.

In a consolation match, Hur defeated Michelle Wie of the United States in the 22nd hole. Hur was five down until the tenth hole but fought through to square the match on the 17th hole.

“Michelle played really good on the front nine and I was struggling, I was 5 down going into 11,” Hur said after the round quoted on LPGA website. “I was so frustrated with my game. My caddie kept saying positive things and trying to keep me focused.”

With a birdie on the 22nd hole, Hur had a great come-from-behind victory over Wie to finish third in the tournament.

Throughout the tournament this weekend, long-hitters played comparatively better than the shorter hitters. Since the golf club is located at a high altitude, their drives went about 15 to 20 yards farther than usual and long hitters like Kim, Jutanugarn and Wie all advanced to the semi-finals.

This was the first time the tournament was being played as a match play. In the final round, four of the LPGA tour’s hall of famers - Ochoa, host of the tournament, Annika Sorenstam, Pak Se-ri and Juli Inkster - played a hall of famer exhibition match.

Ochoa and Sorenstam paired up and won against Pak and Inkster, played in a best-ball format, where all the members on the team play every hole and take the lowest score among the team.

After a week off, the players will next fly to Virginia to play the Kingsmill Championship Presented by JTBC starting from May 18 to 21.