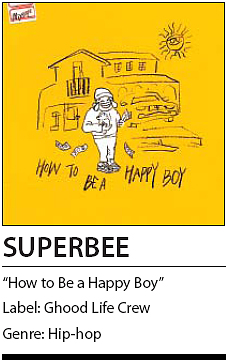 Hip-hop audition program “Show Me the Money” has brought many underground rappers to the mainstream. While some have failed to extend their fifteen minutes of fame, some have thrived. One of the more successful members, rapper Superbee, recently released his highly anticipated mixtape “How to Be a Happy Boy.”

The rapper talks of happiness throughout the album, with features and production from heavyweights and rookies in the hip-hop industry.

“I’m happy. It might be bought with money or it might not. There’s nothing bad about being rich. That’s why I have to be rich.” This is how he introduced the album and the contents are a testament to his beliefs.

Although some cannot put up with the high-pitched voice of the baby-faced rapper, none can rebut the fact that Superbee’s skills and lyricism are far beyond what he showed in his previous works. “Ride Out” and “5 Gawd” are standout tracks from this album and proof that the rapper has now passed the rookie stage of his career.