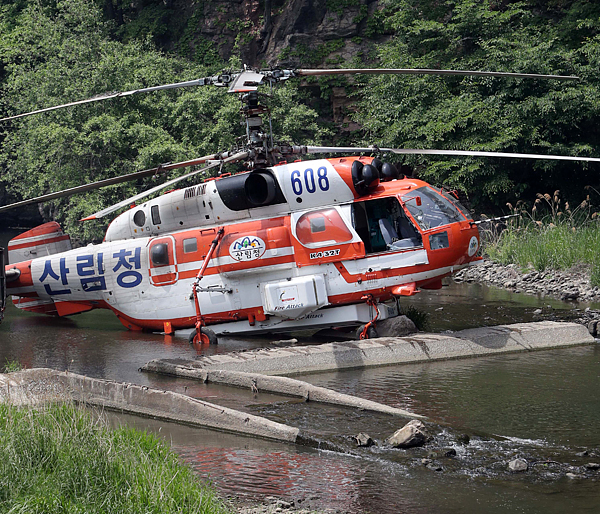 While pouring water on wildfires, a helicopter of the Korea Forest Service makes an emergency landing on a stream in Samcheok, Gangwon. [YONHAP]

Wildfires struck Sangju, North Gyeongsang, and two regions in Gangwon - Samcheok and Gangneung - on Saturday, but the Gangwon wildfires continue unabated in defiance of the thousands of workers and dozens of helicopters mobilized to combat the flames.

One hiker was reported dead and two others hospitalized as a result of the Sangju wildfire, which was extinguished as of Sunday.

Though the Korea Forest Service initially reported a conclusion to firefighting activities for Gangneung, pockets remained as of 8:30 a.m. Monday. The Samcheok fire, raging for its third day as of Monday, has been 80 percent extinguished.

Shin Won-sop, minister of the Korea Forest Service, said the cause of the Sangju fire is thought to be the incineration of waste by a hiker, and the other two are also suspected to be man-made.

A helicopter involved in the Samcheok firefighting efforts was forced to make an emergency landing after it was thought to have struck a high-tension power line, leading to the death of a maintenance worker aboard the helicopter on Monday.

A total of 60 helicopters and over 10,000 people were mobilized in the three areas. An estimated area equivalent to 212 football stadiums of forest, or over 150 hectares, has been lost to the fires since Saturday. Residents in the vicinity of the wildfires were told to evacuate.

Residents of Gangneung were taken unaware by the blaze because of the absence of a disaster warning text on Sunday morning.

“Normally, a text is sent, but there wasn’t any information,” Jeong Dong-seon, a resident said. “That there was no loss of life was due to residents sharing the news that there was a fire.”

The Ministry of Public Safety and Security’s disaster warning system was silent in the onset of the conflagrations in the two provinces. The Public Safety Ministry established a safety command center in November 2014 after the Sewol ferry tragedy, yet there were no alerts about the major Gyeongju earthquake last year or the weekend wildfires.

The Samcheok and Gangneung wildfires began on the same day, the former on 11:00 a.m. and the latter at 3:00 p.m. However, the Public Safety Ministry sent a dry weather alert to residents of both areas at 4:04 p.m. to be aware of fire risks and the prohibition of incineration of waste. There were no alerts sent to those in Sangju.

There was no relevant information regarding the fire on the Public Safety Ministry’s website on Saturday, nor were there requests to dispatch an emergency disaster alert by municipal governments.

“A disaster warning text request must be done using an official document, but the fire quickly spread and there wasn’t an opportunity to request it while the scale and situation was being assessed,” said an official at the Gangneung city government. “A system that allows for disaster warning texts to be sent to residents by local authorities must be arranged.”