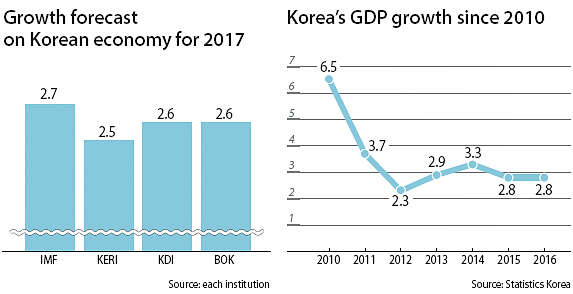 Despite recent indicators that suggest a rosy outlook for the year, the International Monetary Fund held its projection for Korea’s economic growth at 2.7 percent on Tuesday.

“In Korea, growth is expected to remain subdued at 2.7 percent in 2017 and increase to 2.8 percent in 2018,” the Washington-based organization said in a report on regional outlook.

It added that “uncertainty amid political turmoil,” including the corruption trial of former President Park Geun-hye and charges of government collusion with major conglomerates, will be reflected in local consumption and pose a threat to economic growth.

The IMF set its current growth outlook for Korea at 2.7 percent last month. The decision to hold the forecast comes after Korea enjoyed its second-highest export record last month.

Outbound shipments in April jumped over 24 percent from last year, amounting to $51 billion and trailing behind the record figure of $51.6 billion from two years ago by less than a billion dollars. April was the sixth consecutive month that Korean export growth stayed in positive terrain.

Financially, Korea’s benchmark index, the Kospi, closed at 2,292.76 on Monday, a record high in Korean stock market history. The market was closed Tuesday for Election Day.

Given such upbeat indicators, local analysts have remained positive about the Korean economy this year.

Samsung Asset Management noted in a report that the IMF raised its estimate for GDP growth this year from 2.6 percent to 2.7 percent last month.

“Korea’s macroeconomic conditions, exports and domestic demand look positive,” the report said. “Among 13 major export items, IT-related products continue to expand. The volume of semiconductor exports catapulted 56.9 percent compared to a year ago to enable such a drastic rise in outbound shipments.”

Domestically, the consumer sentiment index for April was above 100 points for the first time in six month, at 101.2. A reading above 100 suggests optimists outnumber pessimists.

As a result, the low consumption cited by the IMF as a deterrent to growth is likely to turn around following the election, local analysts said.

“After hitting rock bottom in February, local consumption has improved substantially in March and April,” said Lee Mi-seon, an analyst at Hana Financial Investment. “Consumer sentiment that froze following the impeachment [of Park Geun-hye in December] rebounded, and card spending turned around starting in March.”

Lee suggested projections for consumer spending in the second quarter should be adjusted up given the higher consumer sentiment index in April, a weeklong holiday in early May that encouraged spending and optimism following the presidential election.

As for the regional outlook in Asia, the IMF forecast GDP growth to reach 5.5 percent in 2017 and 5.4 percent in 2018, up by 0.1 percentage point compared to the forecast in the October 2016 World Economic Outlook.