Stars cast their votes for president

Stars cast their votes for president 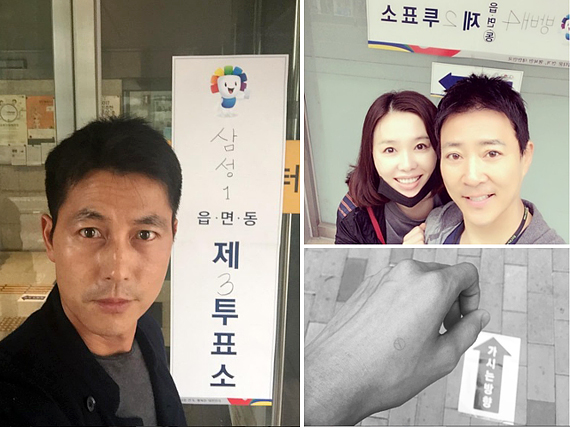 Korea’s biggest celebrities spent Election Day urging citizens to get out and exercise their right to vote on social media.

Ever since former president Park Geun-hye became embroiled in an abuse of power scandal involving her confidante Choi Soon-sil’s involvement in state affairs last fall, many celebrities have openly voiced their opinions regarding political issues, continuing through the recent campaign season.

Many celebrities, young and old, spoke of the need of a just society following a regime where some were disadvantaged regardless of one’s abilities.

Actor Ryu Jun-yeol, one of the breakout stars of last year’s hit drama “Reply 1988,” uploaded a picture with the stamp used to vote on his hand, which has become a trend on social media since early voting was held last Thursday and Friday.

Korea’s top male actor Jung Woo-sung uploaded a photo, albeit without a caption, on his Instagram after voting in Samseong-dong, southern Seoul.

The movie industry was distraught over the existence of a cultural blacklist during the previous administration, which listed a number of directors and actors.

Television personality and writer Heo Ji-woong, who actively criticized the previous government for their actions, posted a photo in front of a voting booth yesterday, with the caption, “I hope today’s votes will be an important scene etched in history and a moment that the next generation can look back on with pride.”

Many celebrities chose to vote with members of their families. Actress Park Shin-hye, famous for her role in “Miracle in Cell No. 7,” uploaded a photo with a voting stamp on her hand together with her father. The caption read, “I went fishing with my father yesterday as it was Parent’s Day. We came back and voted together!”

Actor Choi Soo-jong and wife Ha Hee-ra, who are known to boast about their relationship, also uploaded a photo after casting their vote. Choi captioned the photo, “Voted. [It’s our] precious and beautiful right.”

Many stars regarded the elections as a special and important process in changing Korea for the better and urged everyone to cast their votes for change.