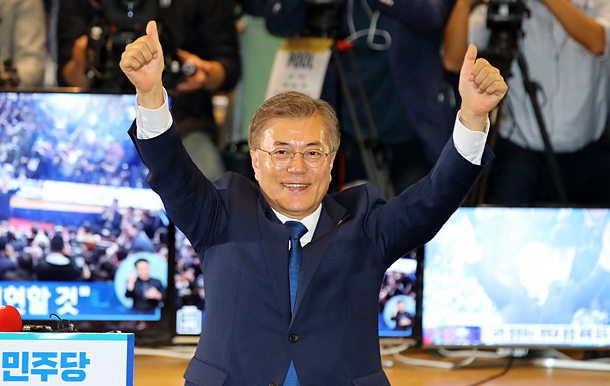 Moon Jae-in, presidential candidate of the Democratic Party, reacts to supporters in the National Assembly Members’ Office in Yeouido, western Seoul, Tuesday evening after an exit poll predicted he would win the snap presidential election. [YONHAP]

Moon Jae-in of the Democratic Party seemed headed to the Blue House, winning 41.4 percent in an exit poll on Tuesday in the country’s first presidential snap election.

Voter turnout was very high Tuesday. According to the National Election Commission, 32.8 million voters, 77.2 percent of more than 42.43 million eligible voters, cast ballots to elect the country’s 19th president, including early voting that took place on Thursday and Friday. That is the highest turnout since 2002.

Tuesday’s election is a landmark in the country’s political history, taking place after the presidency of Park Geun-hye was terminated in March through an impeachment process in the aftermath of a massive abuse of power and corruption scandal. Through the two-month campaign, almost all candidates pledged to end or combat decades-long cozy relations between politics and big business.

Moon, who was narrowly defeated by Park in the 2012 presidential election, is a 64-year-old former human rights lawyer. He promoted a series of liberal policies, including greater engagement of North Korea and reform of Korea’s chaebol or conglomerates. He also pledged to overhaul the criminal justice system and amend the constitution to introduce a new governing system that would reduce the power of the president.

After the exit poll was announced, Moon headed to a conference room at the National Assembly, where members of the Democratic Party were waiting to watch the ballot counting broadcast.

“Today is the day that a new Korea has opened,” Moon said.

Moon said he was grateful to see an overwhelming victory reflected in the exit poll. “If I win, today’s victory is a triumph of ardent hopes,” he said. “First we saw the earnest hope of the people to change the administration and the second is [the party]’s earnest hope. Those were the driving forces behind the victory. I owe this victory to the people.

The 19th presidential election had 13 candidates, the largest number ever. The ballots had 15, but two withdrew on the eve of the election.

The exit poll was jointly conducted by three terrestrial broadcasters from 6 a.m. till 8 p.m. Tuesday outside 330 voting stations, on about 99,000 voters. Three polling companies were hired to dispatch 1,650 researchers to survey every fifth person who completed voting.

The accuracy of the exit poll, however, was particularly uncertain as no surveys were conducted for early voting on Thursday and Friday. The turnout for early voting was significant: 26.06 percent of eligible voters.

The broadcasters, therefore, decided to calibrate the exit poll with an estimated outcome for the early voting based on demographic information of the early voters offered by the National Election Commission.

The 42.43 million voters eligible to cast ballots Tuesday were 2 million more than eligible voters in the 2012 presidential election.

Of the major candidates, Moon was largely supported by voters under 60 and even had support in all regions of the country. Hong gained support from older voters, according to previous opinion polls. Moon represented liberals, while Hong was backed by conservative.

According to the National Election Commission, the ballot counting process will start around 8:30 p.m. at 251 stations nationwide. The process is expected to be completed around 6 or 7 a.m. on Wednesday, and a winner can be called around 2 a.m. on Wednesday.

Because it is an early election to fill the vacancy created by the termination of the Park presidency, the five-year tenure of the new president will begin as soon as the National Election Commission finalizes the winner. The new president won’t have time to form a transition committee and will immediately take control of the military.