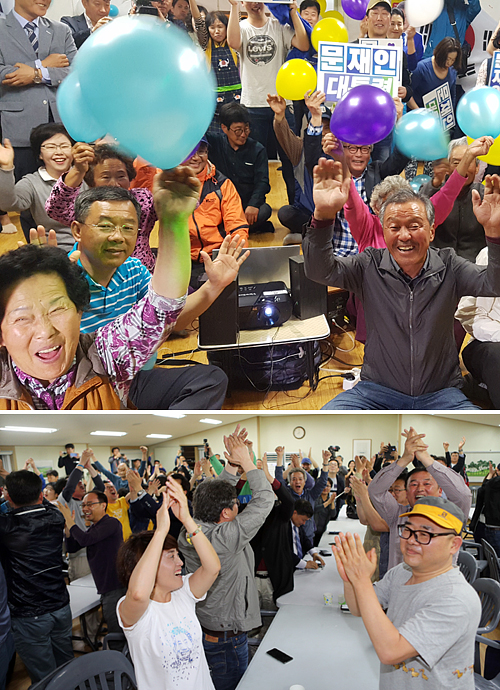 Top: Villagers of President Moon Jae-in’s hometown in Geoje, South Gyeongsang, jubilate together Tuesday evening when broadcasters announce that Moon would win the election according to the exit poll. Bottom: Residents of Bongha Village in Gimhae, South Gyeongsang, the hometown of the late President Roh Moo-hyun, celebrate Tuesday evening as the exit poll predicts Moon would win the snap presidential election. [YONHAP]

About 100 residents gathered at a town hall in President Moon Jae-in’s hometown of Geoje, South Gyeongsang, erupted in cheers when the result of an exit poll was announced on TV at 8 p.m. Tuesday showing Moon in the lead.

“Moon Jae-in as president!” they chanted together.

At the entrance to the town hall hung a banner that read, “Be an invaluable president with big dreams,” alongside many colorful balloons.

“I remember five years ago when President Moon had run and wasn’t elected,” said Lee Seok-ak, a 78-year-old resident of the Namjeong town in Geoje. “The town residents all mourned the results. But now, I am exhilarated, like my own son had won the presidency!”

Moon’s parents had settled in the town in Geoje, where some 40 households live, when they were evacuated from Hamhung, South Hamgyong Province, in 1950 during the Korean War. Born in the town, Moon lived there until age 7, when the family moved to Busan. The family’s former home is located some 30 meters (98 feet) from the town hall.

“Moon and I became like brothers,” said Bae Young-soo, 47-year-old son of Choo Kyung-soon, 87, a family friend to Moon. Choo was next to Moon’s mother when she gave birth to Moon and cut Moon’s umbilical cord. “So my mother still calls Moon her son. She was very happy to hear that he has been elected.”

“We are going to open up a big party to celebrate,” said Seo Jae-soo, head of the community. “We will all eat together and share our joy.”

Some 30 residents of Bongha town in Gimhae, South Gyeongsang, had also gathered at an office building on Tuesday night to watch the election results on TV.

Bongha is home to former President Roh Moo-hyun. Moon was the presidential chief of staff to Roh and the two had worked together before Roh’s presidency as human rights lawyers.

A group of union workers provided a free banquet of boiled pork slices and makgeolli, a fermented rice drink.

“I saw Moon lose the election five years ago at this very spot,” said Jang Il-hwan, a 55-year-old visitor to the town. “He has finally won. I hope that Moon will keep his campaign pledges to become the president for the people and the country.”

“I think Moon will be able to continue and finish some works started by former President Roh Moo-hyun,” said Paek Chang-up, a 59-year-old resident of the town.

“Moon will be the continuation of former President Roh’s leadership and policies,” said a 45-year-old surnamed Kim.

Some 70 residents had also gathered at the town hall of Bongha on Tuesday night, cheering Moon as the exit poll results came out and celebrating his victory into the night.

“Without former President Roh, there would be no President Moon,” said Kim Ho-moon, a 62-year-old resident. “I hope he will continue the path that Roh started.”

BY WE SUNG-WOOK, LEE EUN-JI [chung.juhee@joongang.co.kr]