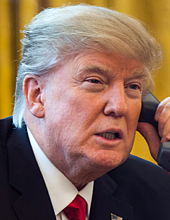 U.S. President Donald Trump invited newly-elected Korean President Moon Jae-in to Washington at the earliest possible date in their first phone call Wednesday, and Seoul is working to arrange a bilateral summit as soon as next month.

Trump and Moon held a 30-minute phone call at 10:30 p.m. Wednesday in which the two leaders agreed to hold a summit soon to discuss North Korea and other pending issues. They also agreed to freely call each other if a crisis arises before they meet.

The White House said in a statement Wednesday that Trump congratulated Moon and the Korean people “on his great election victory and their peaceful, democratic transition of power.”

“President Trump said he looks forward to working with President Moon and invited him to visit Washington at an early date,” the statement continued, adding Moon accepted the invitation.

It added the two leaders “agreed to continue to strengthen the United States-Republic of Korea alliance and to deepen the enduring friendship between our two countries.”

While Moon and Trump will have an occasion to meet at the G-20 summit in Hamburg, Germany, on July 7 and 8, officials in Seoul think a summit shouldn’t wait.

The Moon administration has yet to appoint foreign affairs and security teams, however diplomatic sources still believe that the first Korea-U.S. bilateral summit could happen as early as June.

According to the Blue House in a statement, Moon said to Trump that the South Korea-U.S. alliance “is more important than at any other time given the growing uncertainties over the security situation of the Korean Peninsula.”

Moon said, “The South Korea-U.S. alliance is the foundation of our diplomatic and security policy, and will continue to be so,” adding he appreciates that President Trump has prioritized deterring North Korea’s provocations on his security agenda.

Moon said that he looked forward to working with Trump, whom he described as showing “strong leadership.”

Moon said he will send a special envoy to the United States soon, and that he wishes to “visit Washington at the earliest date possible to meet with President Trump and exchange heart-to-heart opinions.”

Trump replied that he would send a high-level advisory team to Seoul to discuss Moon’s visit to the United States.

Moon said he would like to hold a phone conversation if a situation arises before their summit. Trump told Moon he looked forward to meeting in person and that he should feel free to call whenever necessary.

Seoul is likely to send a special delegation to Washington to schedule a summit later this month.

“A special envoy, often a politician, is usually sent during the transition period to key countries like the United States, China and Japan, but the situation is slightly different because there was no transition before the inauguration,” said a Foreign Ministry official in Seoul Thursday. “The president said he will send a special envoy in the phone conversation, so we will be ready to carry out preparations as soon as he calls for it.”

Moon, who won the presidential snap election Tuesday, came into office the next day following the impeachment and removal of former President Park Geun-hye for an abuse of power and influence-peddling scandal.

Cho June-hyuck, spokesman of the Korean Ministry of Foreign Affairs, said in a briefing Thursday that a U.S.-Korea bilateral summit will “be planned through close negotiations between the two countries.”

Trump and Moon will have to iron out many issues when they meet.

The Trump administration has unfolded a strategy of maximum pressure and engagement toward North Korea and has especially focused on bolstering sanctions on the Kim Jong-un regime. But Trump has also declared that he would be “honored” to meet with North Korean leader Kim Jong-un “under the right circumstances.”

The two leaders may not see eye-to-eye on what could comprise the right circumstances.

Trump has also been calling for a renegotiation of the bilateral free trade agreement (FTA) and for Seoul to shoulder a larger cost of maintaining U.S. troops in Korea and pay for a $1 billion antimissile system.

On Thursday afternoon, Moon held phone conversations with the leaders of Korea’s closest neighbors, China and Japan, discussing North Korea as well as points of bilateral contention. Chinese President Xi Jinping called Moon to congratulate him on his election at noon, and the two had a 40-minute conversation in which they agreed to improve bilateral relations at a time of tensions over the deployment of the Terminal High Altitude Area Defense (Thaad) battery in Korea.

This was the first time the Chinese leader has called a South Korean president to congratulate him or her on an election victory, said Yoon Young-chan, Moon’s press secretary, at a press briefing.

Moon emphasized that resolving the North Korean nuclear problem has to happen in a “comprehensive, phase-by-phase manner, with pressure and sanctions applied at the same time as negotiations go on.”

He added that the goal of the sanctions on North Korea is to lead Pyongyang to negotiations to ultimately scrap its nuclear program, and Xi was said to have expressed agreement.

Moon acknowledged China’s concerns over the deployment of the Thaad system, but went on to request Xi to take a special interest in the concerns of Korean citizens and businesses in China that are suffering from a backlash over the Thaad deployment, asking for the restrictions and sanctions to be “resolved amicably.”

China has engaged in economic retaliation against Korea over the deployment of the U.S.-led Thaad antimissile system in Seongju County, North Gyeongsang, which it says goes against its security interests.

Moon said he hopes the two sides could continue discussions on the Thaad issue.

The two leaders also agreed to exchange special envoys as soon as possible. Moon said he plans to send separate delegations to discuss the Thaad issue and the North Korean nuclear problem to China.

They also agreed to meet in person as soon as possible, while Xi officially invited Moon to Beijing.

In his conversation with Japan’s leader, Moon noted “that most Korean people have difficulty accepting” the 2015 bilateral agreement to resolve the issue of the Japanese military’s sexual slavery of Korean women during World War II.

The two countries’ foreign ministries struck a deal to resolve the so-called comfort women issue on Dec. 28, 2015, consisting of an apology by the Japanese prime minister and a 1 billion yen ($8.98 million) fund for the victims.

Moon said he hoped the two countries could “work together to wisely overcome historical issues.”

Abe repeated his position calling for the faithful implementation of the comfort women deal to build constructive, “future-oriented” bilateral relations.

Moon did not mention renegotiating the deal in this initial conversation, according to his aides, though he called for that during his campaign.

The two leaders agreed to meet as soon as possible.