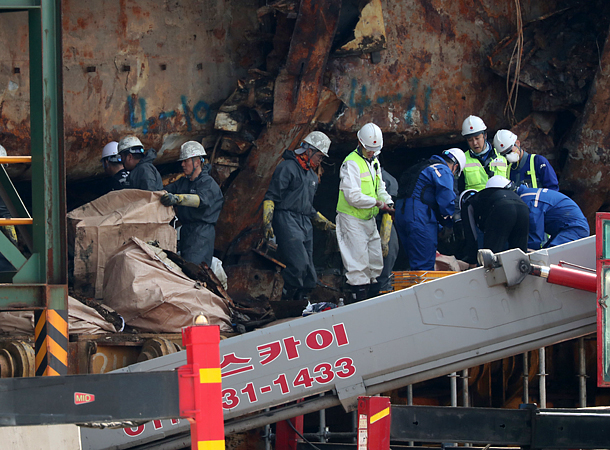 Workers on Thursday keep searching for remains and articles of missing bodies from the portside of the Sewol ferry, where human bone pieces were found. [YONHAP]

A piece of bone suspected to belong to a victim was found on Thursday morning on the port side of the stern of the Sewol ferry at Mokpo New Port in South Jeolla, where two bone pieces suspected to be human were found the day before.

The ferry sank southwest of Jindo, an island in South Jeolla, on April 16, 2014, taking the lives of 304 out of the 476 on board, most of whom were high school students on a field trip. The ferry was lifted from the seabed on March 22 and on April 9 transferred to the port. Nine victims’ bodies are still unaccounted for and the relatives believe they may be inside the ferry.

The finding follows the ministry’s discovery of two bone pieces suspected to be of human on the fourth floor of the ferry on Wednesday.

“Two bone pieces suspected to be human were found on the fourth floor of the ferry,” the Ministry of Oceans and Fisheries said in its statement on Wednesday.

The bone piece found on Thursday, 23 days since the investigation began, was near the section of the ferry where the two bone pieces were found the day before, the ministry said.

Additionally, a bone piece measuring some 34 centimeters (13 inches) was found last week in the seabed where the ferry used to lie for nearly three years before it was salvaged.

All four bone pieces suspected to be human have been sent to the National Forensic Service for DNA tests. The final results of the tests will be released in about a month, the ministry said.

The two bone pieces found on Wednesday were found near the cabins used by high school girls on the ferry. Two female students of the Danwon High School, Huh Da-yoon and Cho Eun-hwa, are among the nine missing. Workers found the two bone pieces while puncturing holes into some sections of the ferry that were severely damaged and collapsed to make their way deeper into the ferry through the collapsed structures and sediments.

Relatives of the nine missing victims have asked the ministry to “puncture holes in the ferry additionally” into the center section of the stern to investigate further.

“The investigation into the ferry has been very slow, and we believe that the Oceans Ministry, the National Assembly’s investigative committee into the Sewol ferry and Korea Salvage in charge of the investigations have all been passing the buck amongst themselves,” said Park Eun-mi, the mother of Huh Da-yoon, in a joint statement written by the relatives of the missing victims. “We beseech the president to take charge of this situation, as he is the only one who can do it.

The investigation into the ferry that began on April 18 has so far found 1,298 personal effects of the passengers, 106 of which have been identified and returned to the owners or their relatives, as of Wednesday. As of Thursday morning, there were at least 810 bones found on the ferry or at the seabed, four of which are suspected to be human.