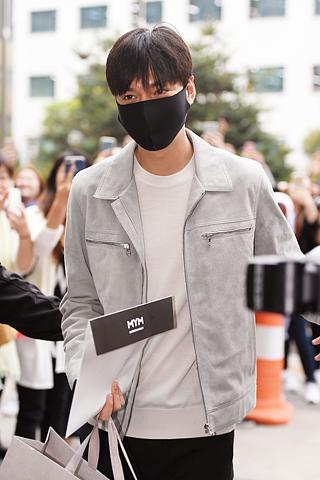 Actor Lee Min-ho began working at a social welfare center in southern Seoul on Friday as a substitute for his mandatory military service.

Wearing a black mask and dressed in black pants and a gray jacket, he arrived at the Gangnam Ward Office around 8:45 a.m. on Friday. Hundreds of fans were waiting for him.

He was ordered to fulfill his duty as a public service worker due to the injuries he sustained in two car accidents, in 2006 and 2011, according to his management agency MYM Entertainment.

He recently shared his encounters with soldiers on the front line during a press briefing for the MBC TV documentary “DMZ, the Wild,” for which he volunteered to narrate.

“I will serve my duty soon, and I feel sad to say goodbye [to fans]. I want to do one more job if possible, before I go,” he said.

Shortly after he arrived at the ward office, he moved to the Suseo Social Welfare Center to begin his official service. The center is run by the ward office.