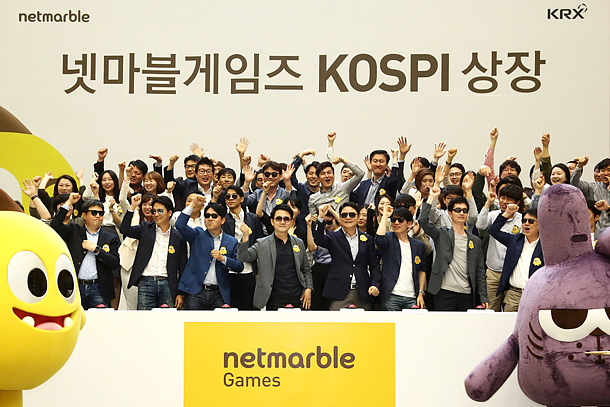 Netmarble Games employees celebrate the company’s IPO during a ceremony at Korea Exchange in Yeouido on Friday. [NETMARBLE GAMES]

In its first trading day, Netmarble raised 2.6 trillion won ($2.3 trillion) in new capital, placing it second among IPOs after Samsung Life Insurance, which raised 4.9 trillion won in 2010. Netmarble’s market capitalization as of Friday was 13.7 trillion won.

The upbeat investor sentiment was reflected in its opening price: 165,000 won, which was 5 percent higher than the company’s initial offering price of 162,000 won. Prices fell during the session, however, and the stock closed down 1.82 percent to 162,000 won on Friday.

During Friday’s session, Netmarble rapidly climbed its way up to rank 21 by market capitalization, pushing down LG Electronics and easily surpassing competitor NCsoft - the former leading local company on the stock market with a market cap of 7.7 trillion won. 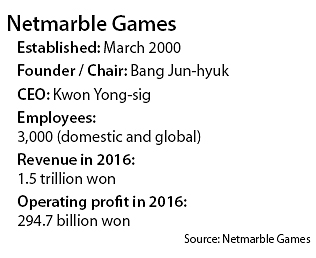 “We believe today’s IPO will turn out to be another opportunity for the company to enhance competence in the global game market,” CEO Kwon Yong-sig of Netmarble Games said at a celebration at the Korea Exchange in Yeouido, western Seoul on Friday.

The 2.6 trillion won capital raised through issuing new shares will be spent mostly for mergers and acquisition, which Netmarble has been conducting aggressively the last few years. About 900 billion won will be used to pay off the debt accumulated to acquire Kabam, a U.S.-based game maker and developer of Marvel: Contest of Champions.

“We believe we can accumulate as much as 3 to 5 trillion won including the remainder of capital raised through IPO,” said a Netmarble spokesperson. “The available fund will be used for mergers and acquisition but we do not have a target company for M&A at the moment,” the spokesperson added.

Netmarble’s IPO was one of the most anticipated public listings this year, alongside ING Life Insurance, Hotel Lotte and two-state-run energy companies.

The backdrop behind such expectations was evident. For the last five years, the company has posted an annual sales growth rate of 61 percent and it raised 1.5 trillion won in revenue last year alone.

“Netmarble turned its business strategy to focus on mobile games in 2013 and since then, it has accumulated a stable publishing capability as well as an expansive portfolio comprised of various genres,” said Hwang Sung-jin, an analyst at HMC Investment Securities.

“Based on sales figures from last year, 45 percent of Netmarble’s profit came from RPG games while 40 and 11 percent came from casual and MMORPGs, respectively.”

Analysts are generally suggesting a target price for Netmarble between 180,000 and 200,000 won.