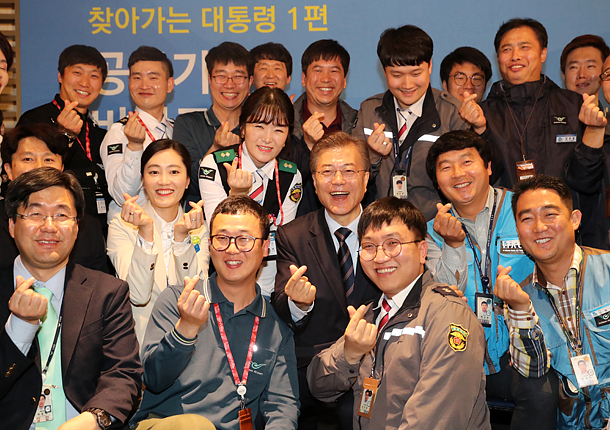 The first executive order from Korea’s new president Moon Jae-in was establishing a committee devoted to creating jobs. The keystone of Moon’s economic campaign agenda is to create 810,000 jobs in the public sector over the next five years. The plan is estimated to cost 21 trillion won ($18.6 billion). Samsung Electronics last month announced it would write off 45 trillion won worth of its treasury stock holding to boost stock value for shareholders. What it offers to throw away is enough to pay 180,000 employees 50 million won a year for the next five years.

Moon has wisely seen through the public need by making job creation his top domestic agenda. Past administrations hung on growth and other economic index target as economic policy. But growth and strong exports have stopped contributing to creating jobs. Governments around the world now customize economic policies to increase employment.

The problem is financing. Even with government promotion, the corporate sector must join in order to keep up the flow in the job pipeline. The public-sector job increase is aimed to give a one-time push during emergency times. It cannot go on increasing jobs in the public sector due to the hefty cost, as public jobs are secure until legal retirement age and pay generous pensions. At the end of the day, the bill will have to be covered by taxes.

The idea can fortunately work in Korea as public-sector job share still hovers below the average of other developed economies. Still Moon’s agenda to create jobs through 10 trillion won in supplementary budget will likely face resistance from the legislative, where his ruling party’s 120 seats falls far short of the 150-vote threshold for bills to pass. His administration must not rely too much on the campaign agenda and instead should create a new business environment by promoting that companies hire more.

The solution is already out there. The government should remove all regulations barring corporate investment. Except for consumer safety protections and unfair practices, companies should not be held back by regulations in venturing into new business fields or expanding. It must persuade trade unions and the permanent work force to make concessions to allow flexibility in the labor market.

None of the past governments were able to see through reform agendas because they were faced with strong resistance from the mainstream. Industrial monopolies and labor unions of permanent workforce make up the biggest mainstream in the business sector. The National Assembly, fearful of losing their votes, would not go along with the overhaul plans. Moon pledged to communicate and cooperate with the legislature for reforms. He must persuade the mainstream and legislature, and if that too does not work, go straight to the people to plead his case.

He could seek the practical gain of increased hiring at large conglomerates while trying to reform chaebol. In return for compromising to respect their archetypal ownership and governance structure to certain extent, he could make them vow increases in the hiring of young people. He should clampdown on their irregularities such as keeping work within subsidiaries and embezzlement. At the same time, he could offer tax incentives to companies that up hiring.

Chaebol also must change according to the times. Public sentiment is not that favorable towards them. They fawn to win favor from foreign shareholders and are stingy towards creating jobs at home. Despite its record performance last year, Samsung Group reduced its employees by 13,600, or 6.6 percent. Samsung Electronics shed 3,700. It annulled a treasury stock trove worth 45 trillion won. Why it could not have spent some of it to make jobs is incomprehensible even taking into account that its earnings come mostly from overseas, lifting shareholders’ value is important and the local labor market remains overly rigid. To the people, the scene looks like a cold-hearted son shunning his parents and siblings who made sacrifices to help him succeed.

If chaebol have respect and love from the people, the government cannot bash them. They will earn public approval if they turn aggressive in creating jobs for young people and invest to make the economy active. Most parents hope their children can one day get a job at a large corporate office. If they offer more jobs, it would be the people who will protect them from government bashing.

*The author is the manager of newspaper production and head of the Economic Research Institute of the JoongAng Ilbo.