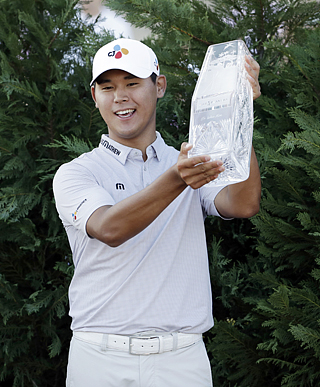 Kim Si-woo of South Korea celebrates after winning the Players Championship at TPC at Sawgrass in Ponte Vedra Beach, Florida, on Sunday. [AP/YONHAP]

Kim Si-woo, a PGA golfer from Seoul, pulled away with a historic win at this year’s Players Championship, becoming the youngest golfer to take home the trophy in the 44-year history of the prestigious event, known as “the fifth major.”

During the final round of the Players Championship at TPC at Sawgrass in Ponte Vedra Beach, Florida, on Sunday, the 21-year-old carded three birdies while going bogey-free to wrap up the day at 3-under par. Kim clinched the second PGA title of his career by concluding the Players 10-under 278, outpacing runners-up Ian Poulter of England and Louis Oosthuizen of South Africa by three strokes.

Along with the honor of being the youngest player to top the leaderboard, Lee is now also the second Korean to win the Players after Choi Kyung-ju, who won the title back in 2011. “I still can’t believe I’m the champion, and I’m very excited that I am the youngest champion,” Kim said during the post-tournament interview. “Choi became a good role model because he won it before I had confidence that a Korean could.”

Along with the win came a cash prize of $1.89 million. The Players Championship boasts the largest purse in the PGA Tour, followed by major championships such as the U.S Open. Kim jumped up in the money list from 114th to 13th as a result.

While Korean female golfers are often considered a force to be reckoned with in the U.S. tour, their male counterparts have shown less than impressive performances in the past few years. While no male Korean golfers were able to crack their way into the top 30 in the world ranking last year, there were five Koreans ranked in the top 10 of the Rolex Ranking, a ranking system for female golfers.

“Korean female golfers are doing so well in the LPGA and I wanted to show that male golfers also have what it takes to play competitively in the U.S. tour,” said Kim, who has moved up to 28th in the ranking from 75th as of Sunday. Other than Kim, Wang Jeung-hun and An Byeong-hun are listed at 57th and 58th in the world ranking as of Sunday.

Capping off the week with the grand victory at The Players provides Kim with another privilege - the strong possibility of joining the international team at this year’s Presidents Cup in September.

Competing against Team United States at the Cup will be the international team, comprising the top 10 international players in the official world ranking. “I’m very excited to play at the Presidents Cup,” Kim was quoted as saying by PGA.com. “From the beginning of this year, I really wished I could be in the top 10 so I could get the ticket to get in, and I’m very proud that I could join this tournament as a representative of Korea and Asia.”