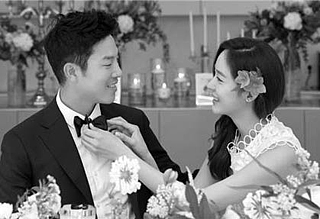 According to the actress’s agency, SL Entertainment, the newlywed couple held a very discreet wedding on Monday.

“Because it is a match made in heaven, the two only wanted to focus on each other on the special day. We ask for your understanding for not being able to reveal the news in advance,” read the official statement by the agency given yesterday.

Soon after the agency’s statement, Sung took to her fan site to share the news herself, adding a hand-written letter for the fans. “I reckon you were surprised by the sudden wedding. I should’ve delivered news like this straight to you, the fans, first, but I wanted to have a quiet wedding. I’m very sorry.”

The lengthy letter continued to thank the fans for their loyalty and love, saying, “For 19 years. I have received your love and you have helped me through my toughest times. I will always [try to pay you back] for what you’ve given me through the years.”

According to the agency, the couple has been in a relationship for four years, which they confirmed to the public in 2014, and they donated all of the wedding expenses that would’ve been used in a normal wedding to charity.

Sung debuted in 1998 with girl group Fin.K.L., and after success as a singer, turned to acting in 2002 with “Bad Girls.” She will continue her acting career after a short break.

Ahn is a professional golfer, works as a coach for the national team and appears as a golf commentator for SBS.