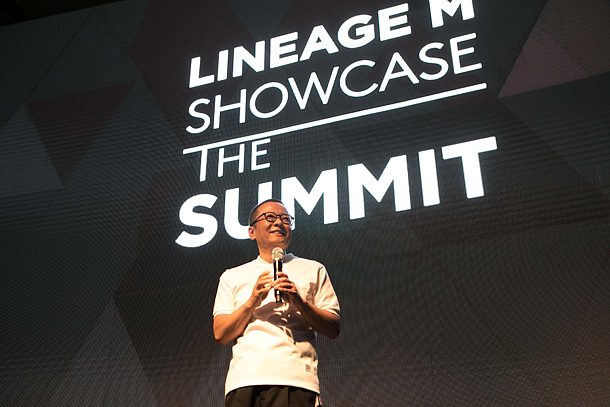 Kim Taek-hun, the chief publishing officer of NCsoft, speaks at a press conference on Tuesday in Seoul. Lineage M will be released on June 21. [NCSOFT]

NCsoft, the developer behind the popular online role-playing game Lineage, will launch a new mobile version of the game in June, the company said Tuesday, as part of its effort to gain a solid footing in the mobile gaming industry.

Lineage M, a replica of NCsoft’s first version of Lineage released for computers in 1998, will hit mobile app stores on June 21. The official release date is in line with widespread predictions among local game enthusiasts and media that the developer would launch Lineage M within the first half of this year.

“Many people said last year that NCsoft’s era was gone,” Jung Jin-soo, chief operating officer and vice president of NCsoft, said during a press conference Tuesday. “Many criticized us for failing to adapt to mobile, but now we stand as a leader in the mobile gaming industry.”

Lineage M is in fact NCsoft’s fourth mobile game. The company threw its hat in the ring last year with Lineage Red Knights, a mobile game that has similar characters to Lineage but different gameplay.

The release of Lineage M comes at a crucial juncture for NCsoft, which saw quarterly profit plummet by 74 percent during the first quarter this year to 17.4 billion won. The company is banking on Lineage M to produce better results, and already, there’s some promise.

As of Sunday, four million people have subscribed to the game in advance. The Lineage series has a somewhat cult-like following in Korea, and the original computer games have brought in accumulated revenue of 3 trillion won, the most among any Korean game. The company expects these diehard fans to migrate to the mobile version.

Lee added that Lineage M will allow voice chatting between users to streamline communication between players during group battles, one of the central play mechanisms of the Lineage series.