Moon and Trump will hold summit in Washington in June

Moon and Trump will hold summit in Washington in June 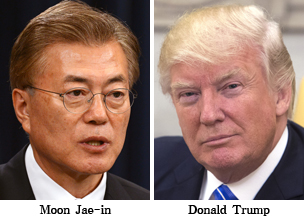 President Moon Jae-in will have a summit with U.S. President Donald Trump in Washington D.C. in late June, the Blue House said Tuesday.

The summit was agreed to at a meeting in Seoul between Chung Eui-yong, head of Moon’s security and foreign affairs task force, and a visiting senior White House official, Matthew Pottinger, senior director for East Asia at the National Security Council.

“Specific schedules and agendas will be discussed further through diplomatic channels,” Yoon said. “We will prepare to make the summit an opportunity to bolster personal bonding and friendship between the two leaders.”