Summit between Moon and Trump set for late June

Summit between Moon and Trump set for late June 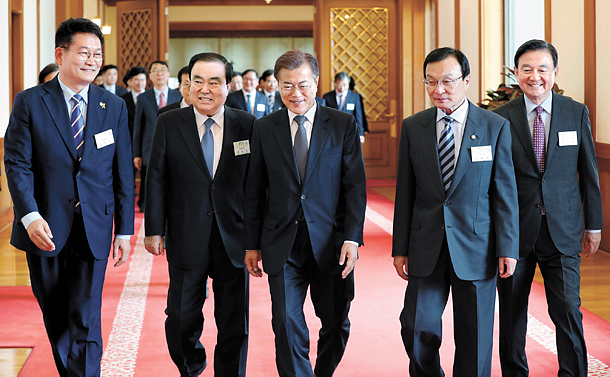 President Moon Jae-in will have a summit with U.S. President Donald Trump in Washington D.C. in late June, the Blue House said Tuesday.

The summit was arranged at a meeting in Seoul between Chung Eui-yong, head of Moon’s security and foreign affairs task force, and a visiting senior White House official, Matthew Pottinger, senior director for East Asia at the National Security Council.

“Specific schedules and agendas will be discussed further through diplomatic channels,” Yoon said. “We will prepare to make the summit an opportunity to bolster personal bonding and friendship between the two leaders.”

Pottinger is the first high-ranking White House official to travel to Seoul after Moon was sworn in last week. At Tuesday’s meeting, Chung and Pottinger agreed that dialogue with Pyongyang can be possible when conditions are appropriate, Yoon said.

Chung and Pottinger also confirmed that Moon and Trump share the same vision on how to handle the North. Calling the complete dismantlement of Pyongyang’s nuclear programs an “ultimate goal,” Moon and Trump both believe that all possible means including sanctions and talks should be used, Yoon said. They also shared views that dialogue with Pyongyang could be possible when conditions are right and that the two countries should seek a bold and practical plan to achieve that goal.

Because Moon won a snap election following the impeachment and removal of Park Geun-hye from office, he started his five-year term without a transition period. Although he has filled a few key vacancies, appointments have yet to be made for the posts in charge of foreign affairs, defense and North Korea policies.

In the meantime, Chung, former ambassador to Geneva, is acting as the head of Moon’s foreign affairs and national security task force. The National Security Office of the Blue House and foreign, defense and unification ministries are all headed by officials appointed by Park.

According to the Blue House, Moon stopped by the Chung-Pottinger meeting for about seven minutes and expressed appreciation for Trump’s congratulatory message on his presidential victory. “I am very satisfied with our telephone talks,” Moon was quoted as saying by Yoon. “I hope to meet Trump soon.”

Moon, an advocate of more liberal policies toward the North, also said he cherishes the importance of Korea-U.S. alliance and will send a special envoy to the United States this week to follow through with the talk he had with Trump. Hong Seok-hyun, former chairman of the JoongAng Ilbo and JTBC, was named as Moon’s special envoy to visit the Trump White House.

“The visit will be an opportunity to demonstrate the firm Korea-U.S alliance to not only the people of the two countries but also to the world,” Moon said.

Later in the day, Moon had a luncheon with the five special envoys he has selected to coordinate relations with major countries. In addition to Hong, Moon will also dispatch former Prime Minister and seven-term Democratic Party (DP) lawmaker Lee Hae-chan to China. DP lawmaker and former Vice National Assembly Speaker Moon Hee-sang will visit Japan and Rep. Song Young-gil of the DP will visit Russia. For the European Union and Germany, Cho Yoon-je, a professor at the graduate school of international studies at Sogang University, will serve as envoy.

The envoys will deliver Moon’s letters to the governments of their destination countries.

While a timetable for their trips was not announced as of Tuesday, Hong is expected to leave for Washington Wednesday. Lee will visit Beijing on Thursday, the Foreign Ministry of China said.