On June 11, 1983, Korean football fans gathered around the television to watch the U-20 Korean national football team play a quarterfinal match against Uruguay in Mexico. While the two teams were tied at 1-1, in the 14th minute of overtime, Shin Yon-ho scored a winning goal assisted by Kim Jong-boo and the team, considered an underdog in the tournament, advanced to the semi-final and earned the nickname “Red Devils.”

The team’s journey that year in the World Cup was a continuous challenge. During Asia qualifying in 1982, South Korea finished third and was not able to earn the FIFA World Cup ticket, which was given to top two teams in Asian qualifying. But South Korea was given another shot at the World Cup when North Korea got suspended from playing in international games.

Although they were given a spot at the World Cup, the country didn’t provide the team much support.

“The players had to bring their own food and since we didn’t have a cook,” Park said, “I had to cook for the players.”

“In preparation to play in Mexico, at high altitude, we ran across the field wearing masks,” Shin said. “There was a player who passed out during training.”

“All we knew about our competition was the name of the country and the names of key players,” Kim said. “There were famous players in the semifinal when we played against Brazil, but we differentiated players by their numbers, not by knowing their playing style, strengths or weaknesses.”

A day before their group match against Mexico, the team was informed that they would have to play at a different facility because the host had decided to change the venue. Not only that, in the semifinal game against Brazil, Joao Havelange, the former president of FIFA from 1974 to 1998, only shook hands with the Brazilian players and referees.

Korea lost its first group match 2-0 to Scotland but won the next two matches against Mexico and Australia to get to the quarter finals. Although they lost 2-1 against Brazil in the semi final, when the team returned to Korea, they were welcomed by fans. 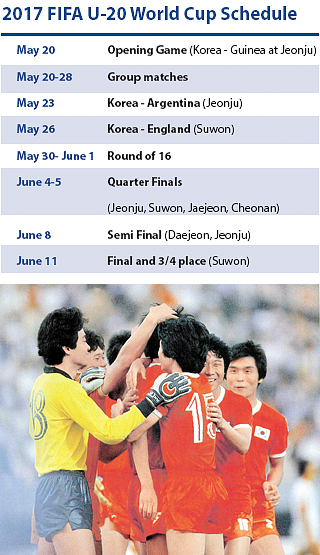 Members of the U-20 Korean national football team celebrate a winning goal in a quarterfinal match against Uruguay in Mexico in 1983. [KOREA FOOTBALL ASSOCIATION]

“We were treated like the 2002 World Cup team, or maybe even better,” Shin said. “We had a car parade from Gimpo Airport, cab drivers drove us for free and some big companies gave us colored TVs as presents.”

Just like how the 1983 national team was led by Park, Shin Yon-ho and Kim, this time, Shin Tae-yong, Lee Seung-woo and Paik Seung-ho, the team’s leading strikers, are expected to lead the team.

“At the time, we just played hard,” Kim said. “But now, our team has players in elite European clubs. If they play with confidence, the Korean national team will have another success at the World Cup.”

The U-20 Korean national football team will start the U-20 FIFA World Cup Group A matches on May 20 against Guinea at Jeonju World Cup Stadium. Park, Shin Yon-ho and Kim will visit the U-20 national team’s opening match against Guinea will be cheering for them.