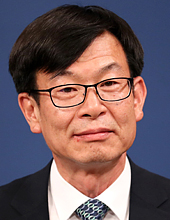 Kim Sang-jo, an economics professor at Hansung University who has been variously called “conglomerate sniper” and “Samsung’s grim reaper” for his outspokenness against chaebol, will serve as first commissioner of the government agency that regulates economic competition.

The exclusive right, which was first adopted in 1980, was initially created to prevent reckless lawsuits that might discourage business activities like investment and expansion.

In recent years though, there has been growing calls to abolish the exclusive right after several high-profile cases in which the Fair Trade Commission only fined companies and never pushed the case to prosecutors.

On the campaign trail, Moon had pledged to strengthen antitrust regulation, and Kim devised many of his policy platforms. Thus, his appointment to the commissioner post was expected.

With Kim leading the nation’s antitrust watchdog, the new administration’s agenda of reforming Korea’s conglomerates and improving corporate governance and transparency is expected to gain momentum.

Kim has been a strong advocate of so-called economic democratization, which first surfaced as a policy slogan during the Lee Myung-bak administration. The policy promotes leveling the playing field for small and midsize companies and imposing greater responsibility on conglomerates that do business with smaller partners.

The policies that Kim devised for Moon’s campaign included preventing conglomerates’ owner families from further strengthening their control through abnormal practices; increasing regulations against conglomerates that abuse their power while doing business with small contractors; expanding the Fair Trade Commission’s investigative authority on antitrust cases; strengthening penalties on actions that obstruct investigation; and reopening a special department inside the Fair Trade Commission that specializes only on conglomerates.

The team was created under the Kim Dae-jung administration but was abolished in 2005 after it was accused of excessive regulation.

Kim, the appointee, earned the nicknames “conglomerate sniper” and “Samsung grim reaper” for his active participation in civic groups that monitor the unfair practices of conglomerates. He has criticized Samsung’s murky corporate governance structure for years and even attended the National Assembly’s hearing on the corruption scandal surrounding President Park Geun-hye. Park’s confidante, Choi Soon-sil, is said to have taken bribes from Korean conglomerates in exchange for political favors.