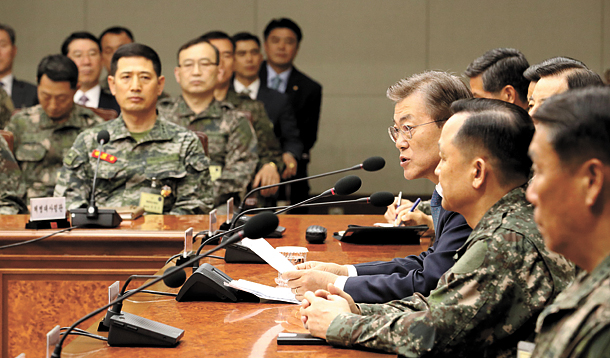 President Moon Jae-in Wednesday speaks to military commanders during his first visit to the National Defense Ministry in Seoul as commander in chief since his inauguration a week ago. [JOINT PRESS CORPS]

President Moon Jae-in said Wednesday he would not tolerate further provocations by North Korea or its nuclear weapons programs during his first visit to the Ministry of National Defense as commander in chief since his inauguration a week ago.

“The firing of a ballistic missile is a serious provocation that violates United Nations Security Council resolutions and poses a serious challenge to peace on the Korean Peninsula as well as to the international community,” said Moon during his meeting with military commanders at the Defense Ministry in Seoul. “I will not tolerate the North’s provocations and nuclear threats.”

The newly elected leader also stressed that South Korea’s military was capable of “stern retaliation against an enemy’s provocation” in any form.

“Our military is maintaining an utmost readiness posture against any form of enemy provocation,” added the president in a surprise choice of words to describe the North Korean military - “enemy” - given his refusal to do so during the campaign.

On the third presidential debate in April, Moon refused to define the North as the “primary enemy state” of the South, saying such a characterization was inappropriate for a presidential aspirant.

Moon’s refusal prompted a backlash among national security-conscious conservatives and bolstered their suspicion that he was leaning toward Pyongyang and away from a longtime ally, the United States.

Moon’s visit to the Defense Ministry came three days after the North fired a ballistic missile that flew 780 kilometers (484 miles) after reaching 2,110 kilometers in height, showing the North’s continuing progress in making a long-rage missile that may someday be able to fly across the Pacific to hit the U.S. West Coast.

Aware of tensions sparked by Pyongyang’s latest missile launch, Moon said he made his visit to the Defense Ministry because of the “very serious” security situation.

“I ask the military to prioritize acquiring core armed strength to counter the North’s nuclear and missile threats as well as securing self-defense capability,” said the commander in chief before generals of the armed forces.

Moon also noted the North’s military and nuclear program had “advanced dramatically” and become “real threats.” To deter it from further provocative acts, Seoul will actively work in cooperation with the international community, he said.

On improving the military’s capabilities, Moon said he would work to improve working conditions for men and women in uniform and invest in modernizing weapons systems.

Moon thanked the military for safeguarding the country during the period of uncertainty caused by the removal of former President Park Geun-hye from power in March. He said a peaceful transition of power to his government was possible due to the military’s role in safeguarding security.

Moon’s stern warning to Pyongyang against further provocations was an echo of his words at a National Security Council meeting convened early Sunday. Condemning Pyongyang’s missile launch, the president, who campaigned on resuming dialogue with the Communist regime, warned that dialogue would only come when the North changed its course away from provocations.

On his arrival at the ministry, Moon was greeted by Defense Minister Han Min-koo and around 100 military officials. Moon was accompanied by his chief of staff, Im Jong-seok, national security chief Kim Kwan-jin and lawmakers belonging to the parliamentary defense committee from across party lines in a display of unity on national defense.

The military said it was first time for military rank and file to welcome a president in such close proximity on a visit to the ministry. In past instances, the officers were kept about 100 meters (328 feet) away from visiting presidents. In a welcoming and cheerful atmosphere, Moon signed autographs for ministry officials standing on the sides to greet the president.

Following his meeting with the military commanders, Moon visited the headquarters of the Joint Chiefs of Staff, about 200 meters away from the ministry building.