U.S. envoy to UN shifts stance a bit on dialogue

U.S. envoy to UN shifts stance a bit on dialogue 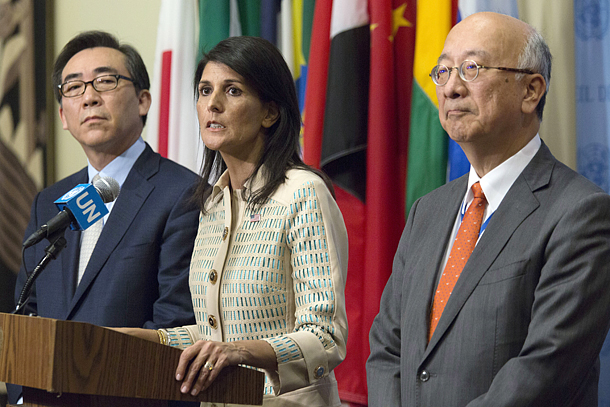 The top U.S. envoy to the United Nations underscored Tuesday that Washington will not hold talks with Pyongyang unless it sees “a total stop” to the regime’s “nuclear process” and additional tests, indicating a slight shift in tone.

U.S. Ambassador to the United Nations Nikki Haley said in a press conference ahead of an emergency session of the New York-based Security Council following North Korea’s latest ballistic missile test on Sunday, “We are willing to talk, but not until we see a total stop of the nuclear process and of any test there,” referring to conditions for dialogue with Pyongyang.

Her remarks seem to indicate a difference in nuance from U.S. Secretary of State Rex Tillerson, who said in a press conference in Seoul on March 17 that the pathway to dialogue “can only be achieved by denuclearizing, giving up their weapons of mass destruction.”

Tillerson told a UN Security Council meeting on North Korea on April 28, “North Korea must take concrete steps to reduce the threat that its illegal weapons programs pose to the United States and our allies before we can even consider talks.”

Haley’s remark indicated Washington may hold talks for a nuclear freeze or a halt in its weapons development process, as opposed to demanding that North Korea completely scrap its program.

“A remark introducing a nuclear-freeze-in-exchange-for-dialogue card through the UN ambassador, not the White House or U.S. State Department, is noteworthy,” Kim Yong-hyun, a North Korea studies professor at Dongguk University, told the JoongAng Ilbo. “It looks like a move by the United States to minimize the political and diplomatic burden as it shows a slight change in its stance to the international community from a tough, one-sided North Korea policy to one that is more dual-natured.”

“We’re not trying to do any of those things,” she said, adding that Pyongyang has to stop its nuclear program and tests like the most recent ballistic missile launch. She said Washington will continue military exercises with South Korea.

“We’re going to make sure we put the pressure on them economically, diplomatically, politically and internationally in any way that we need to,” she said.

“If you are a country that is supplying or supporting North Korea we will call you out on it,” she warned. “We will make sure that everyone knows who you are, and we will target sanctions toward you, as well.”

“You either support North Korea, or you support us,” she said, adding countries have to “pick a side.”

Haley said that the United States is working with China, South Korea and Japan on a new set of sanctions against North Korea in response to its most recent ballistic missile test.

South Korean Ambassador Cho said it is “deeply regrettable” that North Korea launched a ballistic missile “only a few days after the inauguration of our new government in Seoul.”