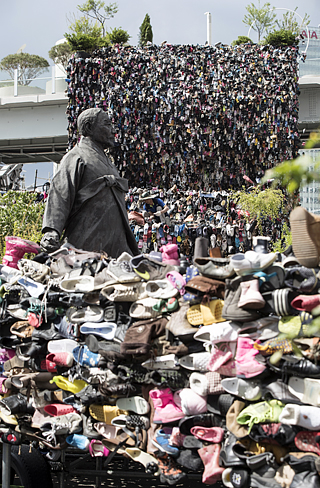 Workers weave abandoned shoes into the shape of a waterfall at the overpass park Seoullo 7017 on Monday. [YONHAP]

When the overpass park Seoullo 7017 opens its gates on Saturday, visitors will not only be greeted by the thousands of trees and flowers planted on the overpass, but also by thousands of abandoned shoes spewing down from the side of the park onto the road below.

“It looks like the scene of some disaster,” said an employee of a cafe located just a few footsteps from the art installation, named “Shoes Tree.” “I don’t like it, it feels dirty.”

“The first time I saw it, it was dark and the structure did scare me a little,” said Kim Hee-jin, a 21-year-old resident passing by the structure on Wednesday. “Like a scene in a zombie movie.”

The artist explained the concept of the art at the Seoul City Hall on Tuesday. “Some people are saying that it looks hideous or monstrous, but I hope they will open their minds to understand what the artist was thinking in creating the piece,” said Hwang Ji-hae, an environmental and garden artist.

“I am trying to create an installation on the side of the overpass park that conveys the message of how an abandoned overpass has turned into a pedestrian park, by using abandoned shoes and trees and flowers.”

The structure is 100 meters (328 feet) long and 10 meters wide and starts from the side of the overpass park, standing some 17 meters high. It is made of some 30,000 shoes, according to the Seoul Metropolitan Government.

“Abandoned and worn-out shoes were chosen because they cannot be reused, and they represent how we humans consume from the moment we are born to when we die,” Hwang said. “We are all in this cycle of birth and death and I wanted to convey a message along that line.”

The structure will be displayed from Saturday to May 28.

“It is scheduled to be scrapped after that but we may keep it longer depending on how people feel about it,” said Lee Won-young, head of the Landscape Planning Division of the Green Seoul Bureau.

Hwang said she is 80 percent done with the work.

“Honestly, I feel like people are peeking in while I’m in the middle of a shower,” Hwang said. “The work is still ongoing and an artist must be given some personal space to focus while he or she is working.”

Numerous articles about the structure has been published recently, many using headlines with words like “monstrous” or “eerie.” The structure has created a sensation on social network platforms, too.

“We chose to work with Hwang because she is one of the best artists when it comes to botanical arts, Lee said. “She won a gold medal for her work, ‘Quiet Time: DMZ Forbidden Garden’ at the Chelsea Flower Show in 2012 and another gold medal at the show the year before. We asked her because her art concepts match our plans of renovating the city to make it greener.”

The city government spent 139 million won ($124,207) in creating the art, with most of the budget spent on installing the metal skeletal structures of the piece. Hwang is creating the art pro bono.

“I think it’s great,” said Lim Joo-won, a 33-year-old resident of Seoul. “The art is situated between the historical building of former Seoul Station and the modern buildings of the city. It kind of feels like the art is telling us to remember what has passed, to remember the things that are forgotten and left behind, like these abandoned shoes.”

“They were the first things I saw when I walked out of Seoul Station in my first-ever visit to this city,” said Leisan Shakirova, a Russian who lives in Japan. “I was lost and all I saw around me were shoes. I think it’s cool. Why not try something interesting? That’s what the arts are for.”