A bad omen for PyeongChang?

A bad omen for PyeongChang? 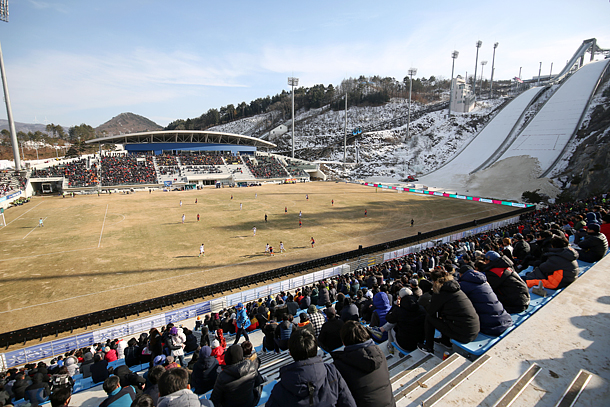 The Alpensia Stadium, the site for the opening and closing ceremonies of the 2018 PyeongChang Winter Games, has no roof due to a lack of funding. [K League]

Two years ago, Song Seung-hwan took the job of general director for the opening and closing ceremonies of the PyeongChang Winter Olympics. Song says he regrets the decision, all because of the weather. He often has nightmares, always the same one.

“February 9, 2018, is the opening day of the PyeongChang Olympic Games. It is just as I had worried. The Alpensia Stadium is frozen due to the snowstorm last night. Military servicemen were mobilized to break the ice and thaw the seats, to no avail. How can all 35,000 seats be cleared with less than 12 hours before the opening ceremony at 8 pm? Spectators will begin entering at 6 pm.

“Heaven didn’t grant my prayers. I prayed for an abnormally warm winter, but this year, the winter is especially cold, with heavy snowfalls. The temperature is -12 degrees Celsius [10.4 degrees Fahrenheit], with wind blowing at 10 meters [33 feet] per hour. The spectators need to sit for four hours in the freezing cold. No matter how spectacular the show may be, the audience would be moved when they are warm and comfortable. People may leave during the president’s speech, and foreign guests are also shivering. This is a disaster.”

Song said that it was horrifying to imagine. This is all because of funding. The Alpensia Stadium does not have a roof, a decision that was made to cut construction costs and make removal easier. So the stadium is exposed to the bitter cold. There was an idea to install heating cables in the seats, but it was not accepted due to budget constraints. It would be nice to provide cold weather gear. Spectators will be provided with a lap blanket and hand-warming pads to stay within the budget of 16,000 won ($14) per person. A thick throw blanket, hat or mask is out of the budget.

Song went to the Alpensia Stadium at 8 pm on February 9. It was -5 degrees Celsius and the wind chill must have been -20 degrees. He was dressed heavily, but it didn’t help. The PyeongChang Olympic Organization Committee director Lee Byung-nam and other staff members accompanied Song and they also complained that they were freezing after an hour.

The government spent a total of 13 trillion won on the Pyeongchang Olympics, including investment in infrastructure such as highways and a high-speed railroad. Despite having invested trillions, the event is not ready for the cold weather. How did this happen? First of all, the Olympics will include 16 more events than the original plan, and the change involves an additional workforce, equipment and facilities. It requires 400 billion won more, and raising the funds was not easy.

The operation cost does not get government assistance. It is covered by profits from selling sports lottery tickets, event tickets and corporate donations. Companies have invested 880 billion won, 93.6 percent of the total. But sponsorship and donations stopped after the Choi Soon-sil scandal of late 2016. Industry insiders said that companies were in trouble for giving money to the Mi-R and K-Sports Foundations, and they didn’t want to contribute more.

After the corruption and abuse of power scandal and presidential election, the PyeongChang Winter Olympics have been nearly forgotten. The event will require operating costs starting by the end of 2017. Without money, volunteers cannot be used and temporary tents cannot be set up. When spectators pay 200,000 won to 1.5 million won to watch the ceremony, they may have to freeze in the bitter cold because 50,000 won cold weather gear cannot be provided. At this rate, PyeongChang will become notorious rather than heightening Korea’s reputation.

We cannot let nature decide the fate of the PyeongChang Games.