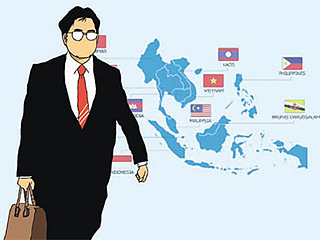 President Moon Jae-in sent special envoys to the four powers around the Korean Peninsula and the European Union. But Asean was not included this time, although it is Korea’s key partner.

Asean is a close partner to Korea economically. As its second largest trading partner, Korea makes more than $30 billion in trade surplus every year. Investment in Asean was $5 billion last year, far more than investments in the European Union, which totaled $2.5 billion, or in China, which totaled $3.3 billion. Korea gets the second most construction orders from Asean countries, after the Middle East.

Asean’s importance is more notable considering its growth potential. Ten Asean nations launched the Asean community in late 2015 under the motto, “One Vision, One Identity, One Community.” Asean’s population is 640 million, the third largest in the world, compared to the European Union’s 500 million. The total GDP was $2.6 trillion, sixth in the world, but with stable 5 percent annual growth it is expected to be fourth by 2050.

Also, aging of population is accelerating, not just in Korea and Japan but also in China, yet Asean has great potential as a production center and consumption market thanks to its large young population and fast-growing middle class.

Korea and Asean have mutually complementary economic structures and can be great partners. Asean wants to learn Korea’s development strategy and know-how, and Korea considers Asean a stable provider of resources and a good partner for overseas expansion. Sharing Asian culture and values, Korea and Asean have less reasons for cultural discord and tension.

The most popular destinations that Koreans visit are in the Asean region, not the United States or China. Last year, 6 million Koreans visited Asean nations.

The close human exchanges also contribute to mutual understanding and expanded cooperation — 500,000 workers, students and immigrants by marriage from Asean countries live in Korea, and about the same number of Koreans stay in Asean countries.

The importance of the region is not limited to economic, social and cultural cooperation, either. For peace and stability of the Korean Peninsula, Asean’s cooperation is essential. All 10 members of Asean have diplomatic relations with North Korea, and five of them maintain permanent embassies in Pyongyang. Some countries provide key passages for North Korean defectors. In February, Kim Jong-un was assassinated in Kuala Lumpur, Malaysia, and various North Korea-related incidents happen there.

In international meetings hosted in Asean every year, such as the Asean summit, East Asian Summit, Asean Regional Forum, cooperation and support from Asean nations is indispensable. At the Asean Summit in Manila in late April, Asean leaders affirmed that they intend to remain important partners with regard to the Korean Peninsula and expressed concerns over recent North Korean nuclear and missiles threats.

What is Korea’s vision and policy planning for Asean, which is so close and important? In short, Korea’s Asean strategy is non-existent. No strategies or blueprints have been announced. Today, competition among powers, the United States, China and Japan, is escalating in the Asia-Pacific region. Since the Trump administration, uncertainty in international relations in the region has been increasing, and strategies to keep Korea’s national interests and international status are in urgent need.

Meanwhile, Japan has already established wide partnership with Asean in politics, diplomacy, economy, social and cultural fields since the Fukuda Doctrine was announced in 1977. Prime Minister Abe toured all 10 Asean nations after his inauguration in 2013. Recently, Abe offered 40 trillion won in currency swaps at the Asean+3 financial ministers’ meeting in Yokohama.

China’s rise and expanded influence in the Asean region is overwhelming. Chinese President Xi Jinping proposed that the Asean countries to work together for the 21st century Marine Silk Road and the Asia Infrastructure Investment Bank (AIIB) during his Indonesia visit in October 2013. He chose the region as a partner for the Marine Silk Road, one of China’s ambitious One Road One Belt project.

It is not easy for Korea to directly compete against the United States, China and Japan. But we have no disputes over history or territory with Asean and have no ulterior motive as a middle-class nation.

Korea and Asean can become true partners. It is Korea’s biggest opportunity.

Now that a new administration has been established, there is no reason not to send a presidential envoy to Asean, which can be a blue ocean of investment opportunity. We should not miss the chance to drastically improve our diplomatic relationship with Asean.

*The author is the Secretary General of the Korea-ASEAN Center and former Korean Ambassador to Indonesia.