More older adults are caring for their parents

More older adults are caring for their parents 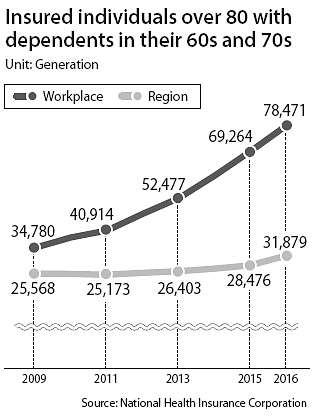 Chang Ju-hong spends his waking hours caring for his 99-year-old father, despite being a 65-years-old grandfather himself.

Chang, who lives in Sejong, was diagnosed with a heart condition three years ago, but according to the prescriptions of Confucian filial piety he remains responsible for his father as the eldest son. As a result of his devotion, he received the Parent’s Day filial piety prize on the commendation of the prime minister.

“Given my age, my children should support me,” he says, “but taking care of my father is my top priority.”

Remarkable though his situation is, it is far from unusual. Of the 20 recipients of the prize this year, 16 were over the age of 60, whereas only 12 of the 36 recipients in 2008 were that old. According to the National Health Insurance Corporation (NHIC) on Thursday, the number of nonobuyang, or elderly supporting the elderly, rose to 179,893, a 54.5 percent increase from 2009.

“We live in an era of four concurrent generations as opposed to the traditional three,” said Lee Sam-sik, the head of the Low Fertility and Aging Society Response Planning Group at the Korea Institute for Health and Social Affairs (Kihasa).

Lee Geun-hong is 77 years old and lives in Daejeon, where he supports his 102-year-old mother, who received treatment for colorectal cancer, cataracts and had dentures fit last year. She also recently broke a rib after a fall and due to her declining mental health is no longer able to speak or write.

Lee receives 2 million won ($1,7740) a month from his government employee and national pensions.

“When I was employed, I wasn’t at a high position so my pension isn’t much,” says Lee, “but it’s enough to eat and take care of my mother.”

But not everyone is as well prepared for life as a nonobuyang.

Last year, only 39.8 percent of people over 60 received a national pension. In 2015, the suicide rate among people over 60 in Korea was the highest in the Organization for Economic Co-operation and Development (OECD) area.

Last month in South Gyeongsang, a 95-year-old mother and her 69-year-old son lost their lives in a burning car. According to police, the son had received a diagnosis for stomach cancer while the mother was at a convalescent hospital for severe senility.

“The son had late-stage stomach cancer and was in poor financial straits,” police said, “so he ended both their lives.”

In Gwangmyeong, Gyeonggi, a 62-year-old surnamed Park and his 86-year-old mother live together. Park has had a kidney transplant, joint surgery and suffers from high blood pressure and diabetes. His mother also has high blood pressure and has difficulty walking due to hip surgery. Their household income is the mother’s basic pension of 200,000 won.

“Developed countries with good social welfare, such as national pension and health insurance, are tackling the four-generation problem,” says Lee at Kihasa, “but our circumstances are different and the central government must prepare to help. The first and second generations must mobilize the budget and expand public assistance such as basic pensions, and the third generation must reduce the blind spot of the national pension through low-income health insurance premiums.”