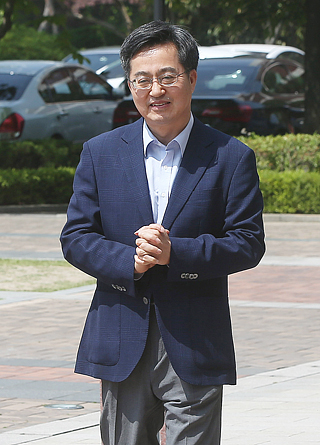 Kim Dong-yeon, nominated deputy prime minister, heads toward Ajou University in Suwon, Gyeonggi, where he was president, on Monday. [YONHAP]

The Moon Jae-in administration’s economic course is taking shape as top policymakers of the new administration that will be steering the so-called J-nomics are named.

The key economic agenda of the new team under President Moon is clear: creating an economy that is focused on people and small and midsize business.

Although the Park Geun-hye administration championed start-ups through its creative economy agenda and the Lee Myung-bak administration pushed for “hidden champions,” the conservative governments urged policies that were more geared toward opportunities for larger businesses such as lifting regulations and cutting corporate taxes.

The nominee of this administration’s deputy prime minister on the economy, who also serves as the nation’s finance and strategy minister, Kim Dong-yeon late Sunday hinted of a more aggressive approach in tapping into the nation’s coffers to deal with the low youth unemployment rate and creating a foundation for sustainable growth.

“An expansionary fiscal policy is appropriate at this current situation,” Kim said Sunday after the Blue House announced him as commander-in-chief for the economic department. “If the unemployment [of youth] continues as now, our economy’s potential growth will be threatened.”

In fact, a recent report by LG Economic Research Institute projected that Korea’s potential growth would fall below 2 percent by 2020. Potential growth is the maximum output an economy could produce when the inflation rate remains constant.

Kim said the next five years will be the last opportunity for Korea to create a foundation for sustainable growth.

“In the short-term [goal] we have to take actions in risk management, creating jobs and revitalizing the economy,” Kim said. “I’m thinking of a growth that centers on good quality jobs and income-based growth.”

“The unemployment rate of youth is in the double-digits and the unemployment rate that these young people feel, according to a recent study, was at 23 percent, which is a serious problem,” Kim said. “Although the recent macroeconomic indicators are positive, we have to look closely if these figures are strong.”

Kim raised the urgency of a supplementary budget, which is considered worth 10 trillion won.

In fact, when Moon was on the campaign trail, he laid out a plan for government annual spending growth of 7 percent. This is double the government fiscal spending plan of 3.5 percent annually between 2016 and 2020 that was announced last year under the conservative Park administration.

The Deputy Prime Minister nominee said the mid- to long-term goal is to change the economic structure.

His view of reforming Korea’s economic structure that is heavily dependent on conglomerates, particularly major exporters, is in line with the other chief economists that were named by Moon-- Chang Ha-sung, Korea university economics professor, who was named senior adviser to the president on Sunday, and Kim Sang-jo, Hansung University professor, tapped as head of the Fair Trade Commission last week.

While the finance minister nominee is a longtime bureaucrat who worked at the Finance Ministry for more than three decades before resigning three years ago, the other two professors are longtime activists that have been known to be anti-conglomerate.

The combination of the three is expected to further expand the economic democratization policies, which means leveling the playing field for smaller businesses, while strengthening oversight on the conglomerates.