Planned fund focuses on investing for a cause

Planned fund focuses on investing for a cause 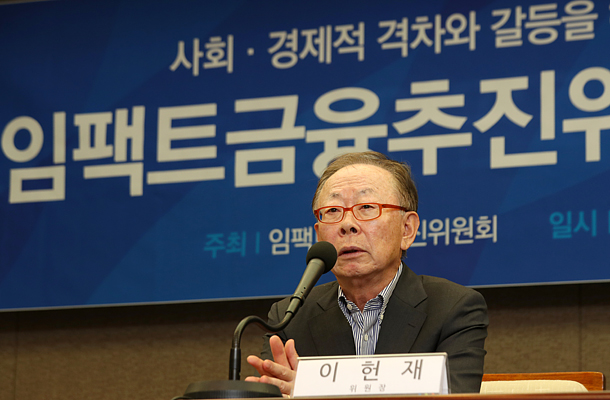 Lee Hun-jai, former deputy prime minister of finance and economy, says that he will establish an organization called Impact Finance Korea at a press briefing in central Seoul on Tuesday. IFK plans to launch by the end of the year. [IMPACT FINANCE KOREA]

Lee Hun-jai, former deputy prime minister for the economy, will launch a financial institution in the country that will focus on impact investing, which refers to investing in companies and organizations to generate a social or environment impact.

Lee, who served in the Roh Moo-hyun administration, said Tuesday at a press briefing in central Seoul, that he will establish an organization called Impact Finance Korea. The purpose of the IFK, he said, is to help solve social issues that the government alone can’t. Impact Finance will target poor entrepreneurs and small business owners.

“About 130 trillion won ($115.8 billion) of the total budget for this year of 400 trillion won is allocated to be spent for health care and employment sectors, but there still is a limitation to the budget [to solve all social issues],” said Lee. “The goal of IFK is to attract as many investments as possible from the private sectors to revitalize the social investment market.”

Impact investing, which is new to the country, is popular in other developed nations like the United States and the United Kingdom.

The purpose is to fund companies and organizations that will help those who are in need, like disabled and low-income households.

“Regular financial institutions focus on making as much profit as possible but we prioritize solving various social issues,” said Lee Chong-soo, chairman of Korea Social Investment, who is running the project with the former finance minister.

“We will only try to make profits that will have our institution continue to operate.”

IFK’s goal for this year is to attract 70 billion won in funding and start operating by the end of the year. Korea Social Investment will help establish the institution and will start receiving investments from the private sector.

“The first goal is to attract about 200 billion won and we will expand the assets more from then,” Lee said. Investors will receive dividends from the institutions’ profit.

Even though the former finance minister is leading the project, he said the institution will work solely as a private firm without the cooperation of the government.

“I try to prove that the economy and society can become more stable through pioneering new financial sector that funds work for the society,” he said.