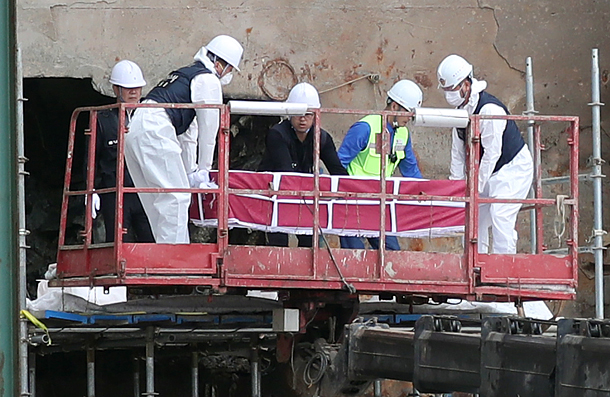 Workers move the almost complete skeleton found on the third floor of the Sewol ferry to a temporary mortuary at the Mokpo New Port in South Jeolla on Tuesday. The remains are to undergo a DNA test to identify the victim. [YONHAP]

An almost-complete skeleton was found in a cabin in the Sewol ferry on Monday during the ongoing investigation to collect the remains of the missing victims of the disaster.

“An almost-complete skeleton was found in the 3-18 section of the ferry around 4:40 p.m. Monday,” the Ministry of Oceans and Fisheries said in its press release.

The section is located on the third floor of the ferry, on the port side of the stern area. Officials and workers on site have told media outlets that the remains were found along with some clothes and a life vest. The bones are to undergo a DNA test by the National Forensic Service to identify the victim.

The ministry added that the section of the ferry was filled with sediments up to 11.9 meters (39 feet) high when the ferry was salvaged. It extracted from the ferry some 243 tons of sediment on Monday.

The ferry sank in the waters southwest of Jindo, an island in South Jeolla, on April 16, 2014. It was carrying 476 people, 304 of whom died, mostly high school students on a field trip. Remains of 295 victims were recovered by October 2014. The ferry was salvaged from the seabed in March of this year and the investigation into the ferry began last month for the nine missing victims. Since then, the remains of two missing victims were found - those of Danwon High School student Huh Da-yoon and teacher Ko Chang-suk.

Remains found in the ferry last week were suspected to be Cho’s, but an official DNA confirmation is yet to come.

The Oceans Ministry is also investigating the seabed. The ministry installed sonar radars on Monday to search the area within a 160-meter by 200-meter and 3-meter tall mesh-fence installed at the seabed. Ko’s bone fragment was found on the seabed on May 5.