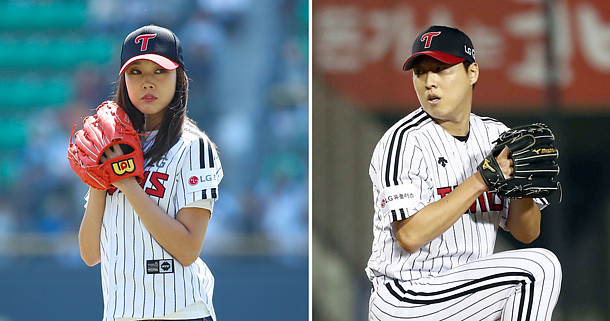 Model and television personality Han Jin confirmed rumors she is dating LG Twins pitcher Cha Woo-chan. The news first surfaced through SBS funE, which claimed the two were dating, according to sources in the baseball industry.

The news outlet reported that the two have been in a relationship for two months.

The news was confirmed by Han’s agency, Esteem Entertainment, only two hours after the first report was published. “We checked with Han and she said she recently got into a relationship with the pitcher,” the agency said.

There was no official word on the news by Cha or his club, LG Twins, as of yesterday.

Han debuted as a model in the second SIFAC in 1999 and is widely regarded Korea’s top model. She is currently active as a television personality, gaining many fans with her appearance on MBC’s program, “I Live Alone.”

Cha has been dubbed “Chabathia” by fans due to the similarities in his pitching style with legendary New York Yankees pitcher CC Sabathia. Cha signed a four-year contract with his current team last year worth 9.5 billion won ($8.53 million), the largest contract ever signed by a free agent pitcher in the KBO.