New ‘Pirates’ movie hopes to get fans back on board

New ‘Pirates’ movie hopes to get fans back on board 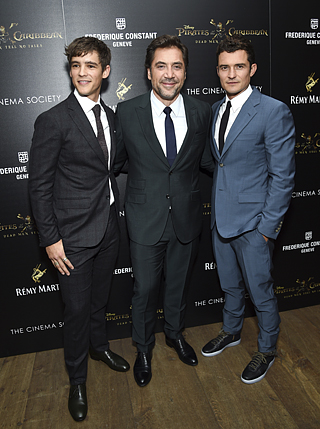 Actors Brenton Thwaites, from left, Javier Bardem and Orlando Bloom attend a special screening of Walt Disney Studios’ “Pirates of the Caribbean: Dead Men Tell No Tales,” hosted by The Cinema Society, at the Crosby Street Hotel on Tuesday in New York. The movie was released in Korea on Wednesday. [AP]

LOS ANGELES - Captain Jack Sparrow might be a household name, but despite the cultural clout, the “Pirates of the Caribbean” franchise has gone adrift. In some ways, it’s been a series of diminishing returns, and they’re not done yet. As the fifth film, “Dead Men Tell No Tales,” prepares to set sail Friday, it’s already facing a few hurdles, including a changed blockbuster landscape, a star with a diminished profile and a six-year gap between installments.

In 2003 “Pirates of the Caribbean: The Curse of the Black Pearl” washed ashore like a revelation - Walt Disney Studios had made a good movie based on a theme park ride, and created an iconic (and money-making) character for Johnny Depp in the process. Fourteen years later things look quite different. The films, which have earned $3.7 billion globally, got progressively worse in quality, and, after the second, “Dead Man’s Chest,” began to fall off in domestic box office returns too (worldwide earnings inched past $1 billion for the fourth, “On Stranger Tides,” however).

Disney has also become a different kind of studio, with their pricey but profitable acquisitions of Marvel Studios and Lucasfilm, in addition to their recent successes transforming their animated classics into live-action blockbusters.

And yet, “Pirates of the Caribbean” soldiers on, and “Dead Men Tell No Tales” has some tricks up its sleeve. With a fresh set of directors at the helm in Joachim Ronning and Espen Sandberg, the filmmakers have made a good effort to return to the spirit of the first film with a new, young cast in Brenton Thwaites and Kaya Scodelario, a return of both Orlando Bloom and Keira Knightley and an Oscar-winning villain in Javier Bardem.

“The actors have worked with Disney and Jerry for many years to make this movie happen. One of the things they were worried about was to bring real characters to the movie,” said Bardem. “I think they brought a different heart to it.”

For Bloom, the lasting appeal is simpler.

“Everyone says, ‘Why do these movies still work?’ And I say, because six-year-old kids are doing pirate performances. So it’s not like we kind of created anything particularly new and spectacular - although I think we did,” Bloom said at the film’s Los Angeles premiere.

While early buzz was good for “Dead Men Tell No Tales,” critics have been less kind in their full reviews. The Associated Press’ Mark Kennedy called it a “weary, battered fifth chapter” that “lumbers into theaters this summer high on CGI tricks but with a hopelessly muddled plot and recurring characters basically running on fumes.”

“After this fifth episode, you’ll wish Disney would just declare the franchise dead and tell no more tales,” Kennedy wrote.

Depp, too, following a string of flops and missteps, including “The Lone Ranger” and the universally derided “Mortdecai,” has been scrutinized for recent messy personal issues, including his divorce from actress Amber Heard.

In January, on the same day the pair finalized their divorce, Depp sued his former business managers seeking more than $25 million accusing them of grossly mismanaging his finances.

Depp’s ex-managers have vehemently denied the actor’s allegations, saying they tried to warn the actor that his spending on lavish properties, vintage vehicles and other items was to blame. They contend Depp’s lifestyle cost more than $2 million a month to maintain.

“People go through all kinds of weird stuff in the world,” Bloom said. “It’s just a shame that it has to be dragged out into the public.”

Producer Jerry Bruckheimer put the spotlight back on the media.

“Unfortunately the media kind of picks on certain people. And it was his turn in the barrel,” Bruckheimer said. “He’s a fabulous guy and a great artist.”

Whether or not the franchise will go on remains to be seen. Much of it likely depends on Depp, and cast members were not eager to imagine a “Pirates of the Caribbean” without him aboard.

Despite all this, tracking suggests that “Pirates 5” could bring in around $80 million in its first weekend in theaters - both a robust number and the second lowest of the series. But ultimately the fate of the franchise, and Depp’s box office power, is in the hands of the ticket buyers.

“No matter how the critics respond, it will be the moviegoers who have the ultimate power to make this film a hit and Johnny Depp could see a return to form after a series of box office disappointments and, unfortunately, very publicly exposed personal issues,” said Paul Dergarabedian, a senior media analyst for comScore. “The last ‘Pirates’ film earned 77 percent of its theatrical revenue outside of North America so it will be the international marketplace that determines whether the film will walk the plank or discover a treasure chest of box office booty.”