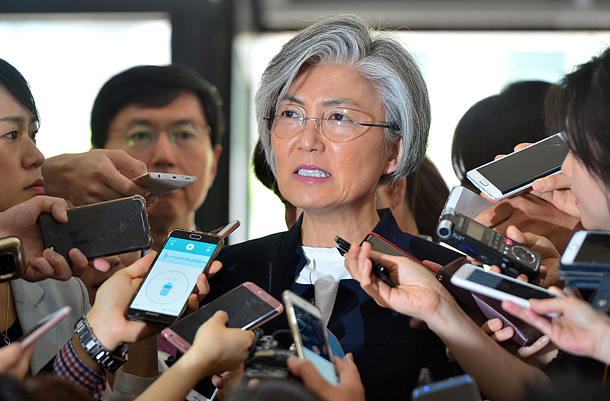 “People ask me sometimes, ‘When do you think it will be enough? When will there be enough women on the court?’ And my answer is when there are nine.” U.S. Supreme Court Justice Ruth Bader Ginsburg said in an interview in 2012. She added that no one ever raised questions when there were nine male judges. Korea’s new administration’s cabinet pick was a reminder of this interview.

As President Moon Jae-in forms his cabinet, it would be notable if he could keep his campaign promise to nominate 30 percent of ministerial positions with women. He pledged that the initial cabinet would begin with 30 percent, and within his term, he would have an equal number of men and women in his cabinet.

As the Small and Medium Business Administration is set to become an independent ministry, there will be 18 ministries. Moon would be keeping a pledge if six of them are women. We still have a long way to go, and foreign minister nominee Kang Kyung-wha is the only woman named so far.

But skepticism is already arising. The female talent pool is too small to find the right candidates, and the gender quota should not be pushed excessively. We should not cling to the number as the quota can be gradually expanded. Some argue competency should be prioritized over consideration for gender as there are dire tasks for the nation. We’ve heard this rhetoric whenever female quota is discussed. I think we need to expand our perspective on the gender ratio in public leadership.

The current situation in Korea is far from the global standard. In March, the UN Women surveyed the rate of female ministers in 193 governments worldwide. Korea was ranked 142nd. As of January, two of the 22 ministerial positions, 9.1 percent, are held by women. Countries with less female participation in government were Middle Eastern nations and underdeveloped countries like Sri Lanka and Pakistan. France was in first place, where 52.9 percent of the Cabinet comprises women.

Korea’s situation is outdated. When Canadian Prime Minister Justin Trudeau took office in 2015, he formed a cabinet with an equal number of men and women for the first time in history. He appointed women to 15 of 30 ministerial positions. When reporters asked why, he said, “Because it’s 2015.” He said that he was happy to present a cabinet that resembles Canada.

The pursuit of gender equality doesn’t just benefit women. An Organization of Economic Cooperation and Development study showed that when the rate of working men and women is equal, the global economic growth rate increases by 12 percent in 20 years. Let’s hope President Moon will keep yet another promise.

*The author is the deputy business news editor of the JoongAng Ilbo.