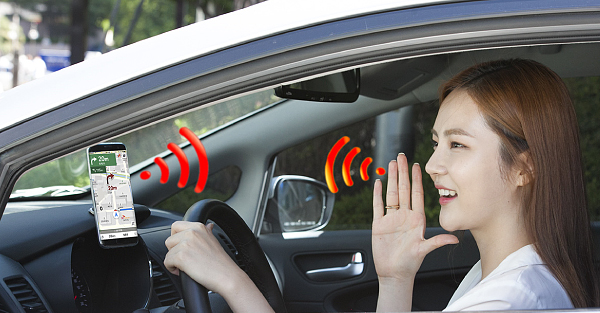 An SK Telecom employee demonstrates the artificial intelligence-based voice command feature on T Map that is under development. The voice-powered search on the navigation app will be available by the third quarter at the earliest, the mobile carrier said. [SK TELECOM]

SK Group, Korea’s third-largest conglomerate, has been making noticeable moves into the field of artificial intelligence.

On Thursday, SK Telecom, the country’s top mobile carrier, said it would add an artificial intelligence-based voice command feature on its T Map navigation app by at least September. Currently, the app allows for a simple voice search of destination, but the feature requires the user to push a button.

The announcement comes two months after the company established an independent department solely dedicated to artificial intelligence and under direct supervision of its CEO as the company seeks to diversify with new technologies.

The upgraded T Map service will effectively allow any commands currently made on the touchscreen to be done by voice. Users will even be able to control home appliances connected over the internet such as closing a gas valve, according to the company. If the user shouts “Please call emergency” on the phone, his or her location will automatically be reported to the police and fire stations nearby.

“Key features of mobile navigation services lie in precise prediction of the arrival time and guidance to fastest routes,” Lee Hae-yeol, senior vice president and head of the T Map business division at SK Telecom, said during a press briefing on Thursday at the company’s headquarters. “T Map will be reborn into a driver’s companion that has complemented safety and fun in the future.”

On the back of its T Map app, SK Telecom plans to go on and develop tech solutions specifically designed for automobiles and various other content by working with smaller firms, start-ups and even individual developers. As of last October, 71 percent of 15 million navigation app users in Korea were using T Map.

The company already has advanced technologies in AI voice command. It sells a cylinder-shaped AI voice speaker called Nugu, which mostly plays music and tells you the weather, but it has been evolving since its launch last September.

SK C&C, an affiliate of SK Telecom that provides IT services, announced on the same day that its AI program Airbril, based on IBM’s Watson computer system, will be used to help write antibiotics prescriptions at Korea University Medical Center.

Korea ranks highest in terms of antibiotic usage per person in the OECD, according to SK C&C, which is why antibiotic prescriptions need to be monitored carefully to prevent misuse or abuse of drugs.

The service, called Aibril Antibiotics Advisor, will be developed based on SK’s artificial intelligence technology for use by the medical team at Korea University in the latter half of next year. The AI adviser will be able to learn theses, guidelines, medical information and insurance information related to antibiotics and infectious diseases so that it can accurately advise doctors on which antibiotic treatment is most suitable for each patient.

The method, cycle of dose and reason for recommendation will also be offered to doctors so that human doctors can make the final decision based on data provided by AI. The adviser will also notify doctors of possible side effects and issues such as insurance information regarding the antibiotic treatment.

IBM’s Watson, which pioneered the use of AI in health, has already started to aid medical diagnoses at five Korean hospitals and is learning Korean to expand its presence in the local market.

For now, these AI advisers do not provide direct diagnoses. Rather, they aid doctors in making better decisions by offering a secondary opinion based on big data analysis. This way, doctors can reduce errors in treatment.

“The partnership will be a good example showing how a big synergy effect could be created when hospitals and industries cooperate,” said Dr. Kim Hyo-myung, executive vice president of medical affairs at Korea University.