A fatal game of spy vs. spy

A fatal game of spy vs. spy 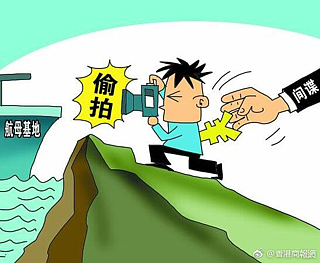 During China’s Warring States period (475 B.C. to 221 B.C.), the Yan king’s political adviser, Su Qin, had a strategy to bring down the bordering state of Qi. “Sun Tzu [the legendary military strategist] defined five tactics for using spies,” he said. “Local spies, internal spies, converted spies, doomed spies and surviving spies. I am going to the Qi state as a doomed spy. The doomed spy will die when the Qi state collapses, so I will risk my life to cut off the retreat and face death to accomplish this goal.” Su Qin brought down the state of Qi and was killed.

In 1949, the owner of China changed. About 1,500 red special agents crossed the Taiwan Strait. Wu Shi, vice chief of staff at the Taiwanese defense ministry, was one of the agents. In 2013, the People’s Liberation Army General Political Department built a memorial for unsung heroes in Beijing. A wall was erected with the names of 846 people executed in Taiwan.

In 1985, Yu Qiangsheng, head of China’s spy agency, defected to the United States. At the same time, Larry Wu-tai Chin, a Chinese agent with the CIA for over 30 years, was arrested. Yu was later assassinated in Latin America. His brother, Yu Zhengsheng, is a member of the Politburo Standing Committee.

In early 2010, Chinese figures close to Seoul and Pyongyang disappeared. Chin Hsi-te, deputy director of the Chinese Academy of Social Sciences’ Japan Institute, was sentenced to a prison term. Li Bin, former ambassador to Korea, was sentenced to shuanggui, a type of internal disciplinary measure conducted in secret. Zhang Liucheng, who oversaw Korean affairs in the Communist Party’s international affairs desk, was executed.

Last week, an article by New York Times reporter Mark Mazzetti was circulated in China. He wrote that 18 to 20 CIA operatives in China have been killed or imprisoned between 2010 and 2012. According to the article, one was shot in front of his colleagues in the courtyard of a government building as a message to others who might have been working for the CIA.

The Chinese government admitted to the imprisonments and killings. “China’s state security department investigates and handles, in accordance with the law, groups, people and activities that harm China’s national security interests and effectively performs its duties,” said Chinese Foreign Ministry spokesperson Hua Chunying. “As a matter of policy, we do not comment on intelligence matters.” Since April, the city of Beijing has been rewarding up to 83 million won ($74,000) for reporting suspected spies.

China has a long history of espionage, and Beijing is at the front line. China has tightened anti-espionage efforts by revising the State Security Law and enacting a counterespionage law, and high-level information to the CIA has since stopped flowing. Compared to five years ago, information leaks about the 19th party convention in the fall were scarce.

Sun Tzu said that information must be obtained from someone who is knowledgeable about the enemy’s situation, and only a wise and enlightened leader can use spies. Eight stars have been added to the Memorial Wall honoring fallen officers at the CIA headquarters. The United States and China have engaged in an infinite rivalry. The Korean intelligence agency, too, needs to strive.