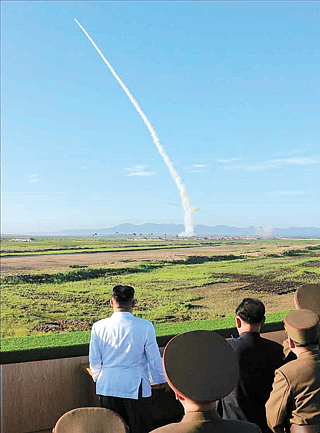 North Korean leader Kim Jong-un was quoted by Pyongyang’s state-run media Sunday to have ordered the mass production of a new type of antiaircraft guided weapon system after observing its successful test.

The Korean Central News Agency (KCNA) did not disclose the date or location of the test in the dispatch, but ran photos that it claimed to be scenes from the operation. One photo featured someone who appeared to be Kim watching the test from far away with his aides behind him in military attire.

“The weapon system’s efficiency to detect and track targets has remarkably improved,” the KCNA reported in English, “and its hitting accuracy has also increased, compared with those of last year.

“Some defects in the weapon system, discovered last year, were perfectly overcome to stand the test.”

Kim reportedly ordered the weapon system be deployed “all over the country like forests” in order to “completely spoil the enemy’s wild dream to command the air.”

Seoul nor Washington have yet to directly respond to the threat, the latest of a string of military provocations, but the Associated Press reported Saturday that the Pentagon was planning its first test of a system for shooting down an intercontinental-range ballistic missile (ICBM), citing U.S. government officials.

The precise date of the upcoming test wasn’t mentioned, but its goal was said to be aimed at more closely simulating a North Korean ICBM targeting the U.S. Kim said in an address on Jan. 1 that the North was in its “final stages” of test-firing an ICBM, the first of its kind.

But the American interceptor was described by the AP to have a “spotty track record,” succeeding in only nine out of 17 attempts since 1999 against missiles that have lesser ranges than an ICBM. The latest test in June 2014 was a success but followed three consecutive failures.

Meanwhile, a South Korean military official told the JoongAng Ilbo Sunday that the U.S. Navy’s nuclear-powered aircraft carrier USS Carl Vinson was set to leave South Korean waters next week after a month-long stay. The official, who spoke on the condition of anonymity, said the decision was based on Washington’s assessment that the Korean Peninsula “isn’t in a state of crisis.”

Exactly when the aircraft carrier will leave domestic waters was not mentioned. It arrived in the East Sea on April 29 and has since been participating in joint military drills with the South Korean Navy, which the military source described as a “sort of armed demonstration against North Korea, aimed at containing its provocations.”

Replacing the Vinson’s presence here will be the USS Ronald Reagan, the official added, another Nimitz-class, nuclear-powered supercarrier from the U.S. Navy. The Japan Times reported on May 17 that the Reagan departed its home port in Yokusuka in Kanagawa Prefecture a day earlier for a scheduled annual patrol of the Asia-Pacific region.